You are here:
Home » Tuscan villages and towns » Towns in the Province of Pisa, Tuscany » San Giuliano Terme 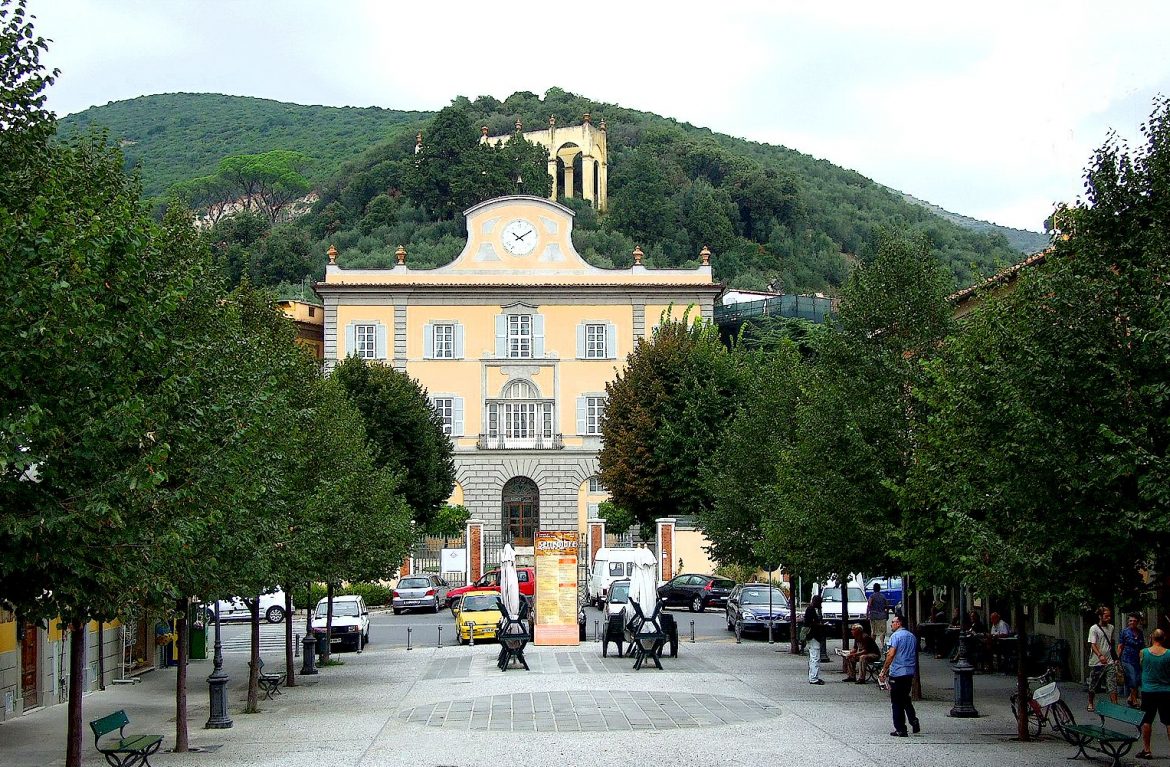 San Giuliano Terme is a municipality and famous spa in the Province of Pisa, located about 5 km northeast of Pisa.

In the middle ages the Countess Matilde of Canossa restored the San Giuliano baths  and in the 15 C they were still popular and Ugolino of Montecatini recommended their beneficial effects for a variety of maladies. They fell into decay for a long period, were rebuilt in the18 C and became one of the most important thermal centres in the Grand Duchy of Tuscany. This was mainly thanks to the frequent visits of Grand Duke Francesco Stefano of Lorena and his wife, Maria Teresa of Austria who made it their spa resort for their summer holidays. It became a very fashionable place visited by people such as King Gustav III of Sweden, Cristian VII of Denmark, British royalty, Ibrahim Pasha, Paolina Bonaparte, Shelley and Mary Shelley, Vittorio Alfieri and Carlo Goldoni. Its fame, both as a place of cure and as a holiday resort continued throughout the 19 C. Today San Giuliano Terme continues to be a relaxing wellness centre.

Neolithic artifacts have been found in the area but the first known settlement was Roman. Pliny the Elder refers to the area as “aquae pisanae” and there are remains of an ancient Roman aqueduct at Caldaccoli  (latin calide acquae). The Conserva di Corliano with its limarium pools and terracotta aquarium fistula is Roman and still functioning today. It was probably built by Lucius Venuleius Montanus, Patron of the Pisan Colony, consul of Attidium (Roman city near Fabriano), who built the Caldaccoli aqueduct and the Baths of Pisa in 92 AD.

In mediaeval times, the historic centre of San Giuliano Terme was the beginning of the pass that connected Pisa and Lucca as well as the border between the two territories. In particular, San Giuliano Terme, together with Ripafratta, constituted Pisa’s main lookouts. Evidence of the importance of the Via Alpestre for Lucca was the presence of a church dedicated to “Beato San Giuliano” located on Monte Pisano, mentioned in a Donation Act dated 772 and another Act of Donation in 812 by one Rachiprando, rector and priest of the church of San Giovanni in Lucca. A hospital for pilgrims , known as the “Spedale di San Giuliano del Monte” was also built near the church and this was of sufficient importance for Lucca to renovate it in 1377. The pass of Monte Pisano lost its importance following cessation of hostilities and Ripafratta was chosen as the safest and easiest route.

Meanwhile, the first restoration of the baths by the Countess Matilde di Canossa dates back to 1112. It was in these years that Pisa had San Giuliano fortified with walls (already present from 1301) more resistant in 1312 as evidenced by an inscription on a marble plaque, currently kept in the thermal establishments. Together with this military restructuring there was a more purely civil one to the thermal establishments in the same year by Count Federico I da Montefeltro and mentioned by Ugolino da Montecatini in 1370. [8] In those same years in 1329 Castruccio Castracani, a leader from Lucca, had a lookout tower built on Monte Pisano, which was destroyed in 1397 by the builders themselves as it became a dangerous outpost every time it was conquered by the Pisans.

San Giuliano Terme and the Grand Duchy of Tuscany

In 1406, with the Florentine conquest of Pisa, the Baths were seriously damaged and a long period of decline began throughout the territory. Finally, at the end of the 15 C, under the dominion of the Medici, some improvements were made to the thermal baths, including the construction of some houses, a hospital, an inn and regulations were also issued to regulate the flow to the baths. With Cosimo II de ‘Medici, a second bridge was built over the Fosso del Mulino (at the time navigable and known as Canale di Ripafratta) right in front of the thermal building, for the road connecting with Pisa. In 1737, with the death of Gian Gastone, the last descendant of the Medici, the Grand Duchy of Tuscany passed to Francesco Stefano di Lorena, who invested in the thermal baths, including the canalisation of the waters and the classification of the therapeutic properties of the waters. The baths became known to the nobility of all Europe starting from 1743, when Francesco Stefano himself made it his summer spa residence. The buildings that currently make up the baths and the church dedicated to Saints Ranieri and Luigi Gonzaga were completed in 1749. Many prominent personalities for the time made use of the spa and many wealthy families built their homes on the slopes of the Pisan Mountains, villas still present throughout the territory today.

An important step for the constitution of the Municipality of San Giuliano Terme was on June 17, 1776 in which Pietro Leopoldo issued a decree in which 31 small towns, previously belonging to the Podesteria of Ripafratta, were united under a single administration with its capital in San Giuliano Terme. In those years, Pietro Leopoldo did much to improve life in the capital, planting plane trees in the viale per Pisa, created viale Boboli and the Parterre, a park in which spa guests could go to relax in pleasing natural surroundings. One especially extravagant construction was Café Haus, a rectangular building with open arches supported by 10 pillars and a view over the Pisan plains, the use of which was reserved for the occupants of the thermal baths.