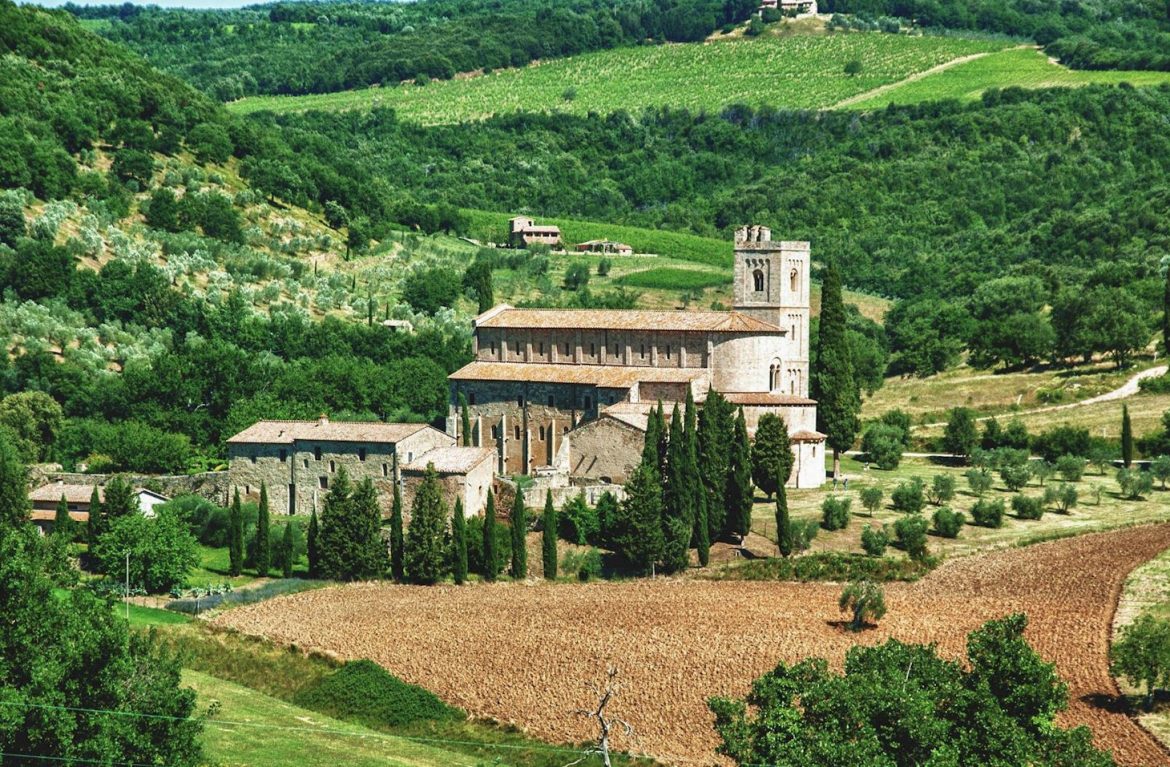 The most famous classic Tuscan villa and gardens in Tuscany: Villa Gamberaia

The Abbey of Sant’Antimo (Abbazia di Sant’Antimo) is an extremely beautiful romanesque church and monastery located at in Castelnuovo dell’Abate near (10 km) Montalcino in a lovely rural setting. Sant’Antimo was formerly an important Benedictine monastery in part due to its situation about 9 km from the Via Francigena, the pilgrimmage route to Rome. For some years the abbey was famous for Gregorian chant but this was discontinued in 2015 when the French monks, Canons Regular of the Order of Premontre, were recalled to France and their place was taken by monks of the Olivetan Benedictine order.

History of the Abbey of Sant’Antimo

The origins of the abbey are lost in the mists of time. Roman artifacts have been found on the site suggesting the presence of a Roman settlement in the area. This would not be surprising if the Via Francigena follows an earlier Roman route. The original Benedictine monastery dates from the time of Charlemagne. The various accounts of Charlemagne founding the abbey are without direct historical foundation; they first appear in a document of the emperor Henry III from 1051.

The earliest surviving document referring to the abbey is a land grant of Louis the Pious dated December 813. The abbot received full temporal powers in an imperial document of about 952. Following a bequest of Bernardo degli Ardengheschi, construction of the present church was begun before 1118, a date which is inscribed on the altar step and on a column to the left of it. Parts of the earlier structure remain visible in the crypt and in the so-called Cappella Carolingia, or Carolingian chapel.

This was the period of greatest power of the abbey, which had authority over 38 churches, from Pisa to Grosseto, and owned roughly 1000 mansi, or farm estates, throughout Tuscany. The most important possession of the abbey was the castle of Montalcino, which was the residence of the abbot.

In the mid-12 C, blocked to the north by Florence, Sienna turned its attention to Montalcino. In 1145, the monks were forced to cede the castle of Radicofani the Siennese. In 1189, Pope Clement III placed the parish church of Montalcino under the bishop of Sienna. Filippo Malavolti, podestà of Sienna, attacked and partly destroyed Montalcino in 1200. An agreement of 1212 stated that the abbey had to hand over a quarter of its territories to Sienna, including Montalcino.

In 1291 Pope Nicholas IV ordered the union of the abbey with the Guglielmites, a reformed branch of the Benedectines, in order to strengthen the abbey. However, after another period of decay in the 15 C, Pope Pius II annexed Sant’Antimo to the new diocese of Montalcino-Pienza (1462), whose bishop was Pius’ “nephew”. The abbey decayed to the point that in the 19 C it was used as stable but in the 1870s the Italian state restored it.

Architecture of the Abbey of Sant’Antimo

Aside from its undoubted spiritual atmosphere, the Abbey of Sant’Antimo provides much pleasure to anyone who appreciates and enjoys architecture. The apse (called the Cappella Carolingia) and the portal, which is richly decorated with animal and vegetable motifs, are the most visible parts of the Carolingian structure. The Carolingian chapel has frescoes by Giovanni d’Asciano and currently acts as sacristy. Under the chapel is a crypt with a nave and two aisles divided by four columns.

The Sala Capitolare (Capitular Hall) is decorated with a triple mullioned window with richly decorated capitals. The ambulatory with its radial chapels is typically French in inspiration. In Italy, this layout is known only in Santa Trinità of Venosa and the Cathedrals of Acerenza and Aversa, all in southern Italy, and in Santa Maria of Piè di Chianti, in the Marche. The ambulatory was where the pilgrims assembled to pray before the Martyrium, where the Saint’s relics are believed to be located.

The aisles and the ambulatory are groin vaulted, while the nave has trusses. The nave, which is ca. 20 m high, is divided into three sections: the huge arcades, the matronaeum and the chiaropiano (upper floor).

Many of the capitals within the church are ornately and imaginatively carved. Perhaps the most notable of these is the so-called capital of “Daniel in the lions’ den”, the work of the French Master of Cabestany. This capital shows Daniel praying between the hungry lions, and, on the other sides, the lions devouring the accusers.

The outer walls are made of alabaster which are the source of the warm (and very photogenic) glow of the church when viewed in bright sunlight.

Badia a Coltibuono Badia a Coltibuono was founded in 1051 by monks of the Benedictine Vallombrosan Order who also began planting the first vineyards in the Upper Chianti area. In 1810, when Tuscany was under Napoleonic rule, the monks were forced to leave…
Read More »

Badia a Passignano Badia a Passignano. According to tradition, a monastery was founded at Passignano by Sichelmo in 890. An Abbey (Badia) was established 1049 as a consequence of the Vallombrosan monastic reforms, and took the form of a quadrangular fortified structure with…
Read More »

Hermitage of San Salvatore (Holy Redeemer) of Lecceto The Monastery of the Holy Saviour at Lecceto in Tuscany, commonly known as the Eremo di Lecceto, was the principal House of the order of the Hermit Friars of Saint Augustine in 1256, when Pope Alexander IV constituted the Augustinian…
Read More »

Tuscany “Tuscany“ is the name of one of the larger of the 20 Regions of Italy (similar to states in the USA and counties in the UK), and is located in northern peninsular Italy, bordering the Tyrrhenian sea to the west.…
Read More »