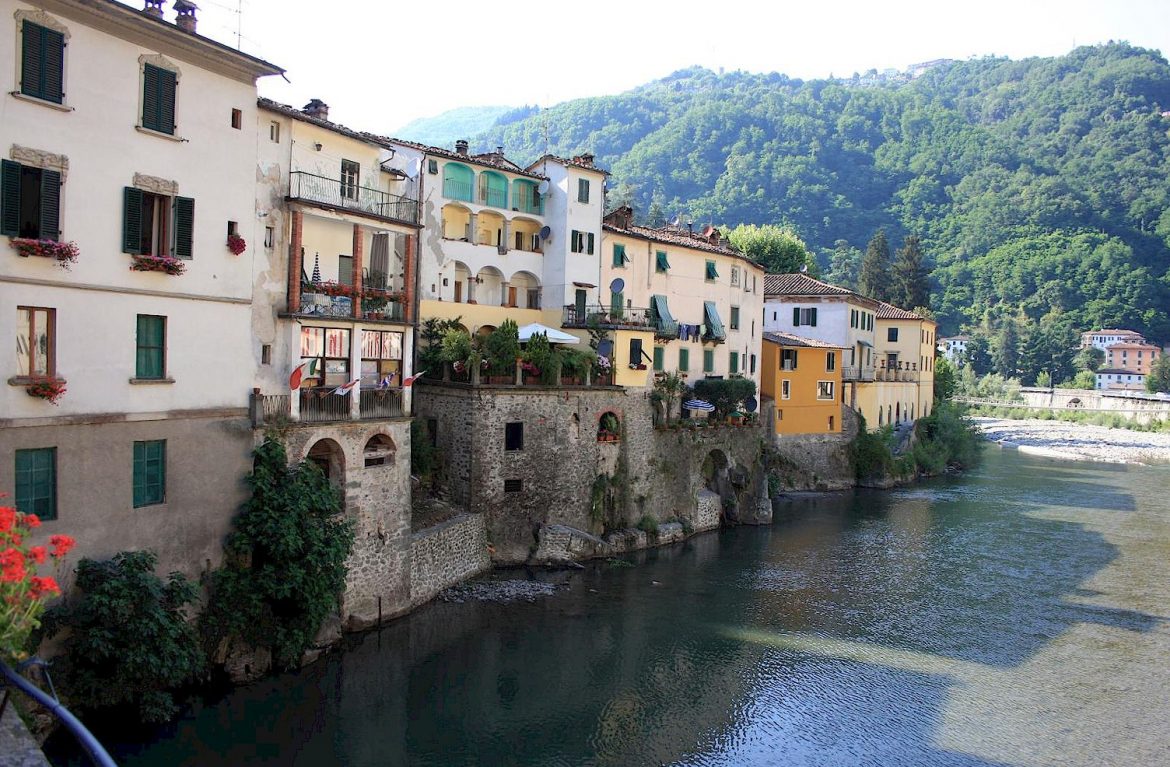 The hot springs and spas of Bagni di Lucca, 25 km from Lucca

Bagni di Lucca is composed of three small towns, namely Fornoli, the newer and most populated area in which the railway station is situated, Ponte a Serraglio, the area which runs along the banks of the river Serchio and La Villa where most of the shops and hotels are located. Ponte Serraglio is the principal village of the hot spring area, but there are hot springs, pools and spas also at La Villa, Docce Bassi and Bagno Caldo. In addition there are at least 25 hamlets and villages in the surrounding hills that are frazioni of the municipality of Bagni di Lucca.

Dotted around the hills are thermal springs whose healing properties have been been known since Roman times. Bagni di Lucca has been famous for its thermal springs since the days of the Etruscans and the Romans. The place was noted for the first time in an official document of 983 AD as “Corsena“, with reference to a donation by the Bishop Teudogrimo of the territory of Bagni di Lucca to Fraolmo of Corvaresi. The area has long been rich in chestnut forests which even rate a mention by Virgil.

In the 19 C, Bagni di Lucca became immensely popular with European aristocracy and benefitted from their wealth and patronage as they stopped off on their grand tours of Europe. It has strong connections with the English that date back to James the Third. His royal patronage of the thermal springs spread through the other royal houses of Europe and its reputation spread as a fashionable watering place in aristocratic circles.

Bagni di Lucca was also enormously popular with ordinary English travellers of whom there are many evocative traces. Among them is the former Protestant English Church. This neo-gothic structure came into being in 1840 due to the efforts of Colonel Stisted (1817-1875), a commander during important battles in India and later Lieutenant Governor of Ontario. In 1845, at Florence, he had married Maria Katherine Eliza Burton (1823–1894), sister of explorer Sir Richard Francis Burton. Their daughter, Georgiana Martha Stisted (1846–1903), wrote The True Life of Captain Sir Richard Burton, a not bad biography of Burton. The church looks more like a palazzo than a church. It has no spire and no bell tower – stipulations of Carlo Lodovico di Borbone, the Duke of Lucca who issued the building permit. Since 1976, it has belonged to the municipality and is used as the Public Library and Historical Records Office with a library of 20,000 antiquarian English books. You can ask at the tourist information office to be shown around.

The Countess Matilde of Canossa, a great enthusiast for the beneficial effects of thermal waters restored the baths at Bagni di Lucca, situated at the foot of the Apennines at the confluence of the rivers Lima and Serchio, 25km from Lucca. This spa is famous for the two grottoes filled with natural vapour with the smaller of the two being dedicated to Paolina Bonaparte, a frequent visitor to the complex. For this place as well we can draw up a list of illustrious people who loved it; Byron, Shelley, Lamartine, Dumas, Paganini, Montale, the Brownings, Anthony Trollope and Michel de Montaigne. The waters are rich in calcium and sodium-bicarbonate, and gush from the ground at a temperature of 54°C. They are acclaimed for their extraordinary therapeutic and regenerative qualities.

The Serchio valley is ideal for an interesting one day tour from Lucca. Among the sights, in addition to Bagni di Lucca and its associated hot spring villages, are the following:

Bagni di San Filippo Bagni di San Filippo, in the province of Grosseto, is situated among the fascinating “crete” of the Val d’Orcia and the woods of Monte Amiata. This is one of Tuscany’s most spectacular spa resorts thanks to the presence of white…
Read More »