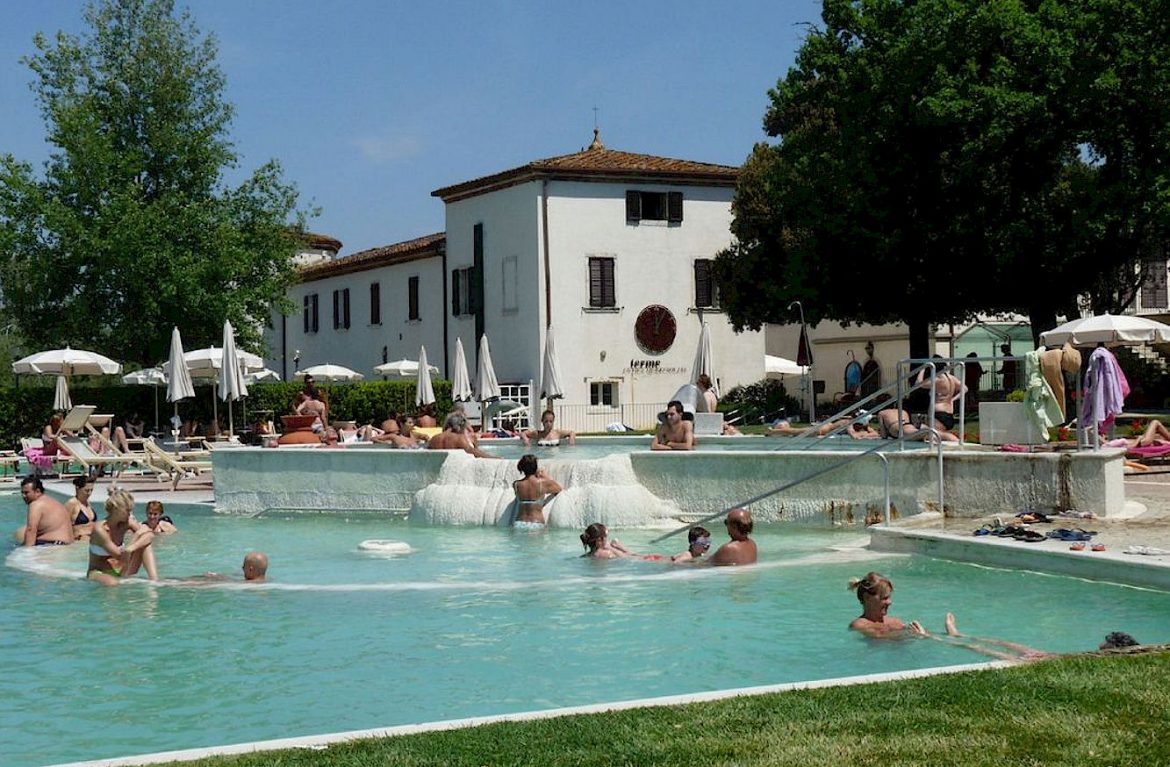 Activities for visitors to Tuscany, Thermal pools, baths, springs and spas in Tuscany, Towns in the Province of Sienna, Tuscany, Tuscany travel guide

The thermal baths of Rapolano Terme in the Crete Senesi, Province of Sienna, Tuscany

Rapolano Terme is situated in one of the most fascinating parts of the Sienese countryside – the Crete Senesi. This spa was known to the Romans, as can be seen at the archaeological site of Campo Muri, and was still in use in the Middle Ages. Then for a long period it was used very little until it was rediscovered in the 19 C when new baths, San Giovanni and Antica Querciaiola, were built around the numerous springs. Giuseppe Garibaldi came here to recover from the many injuries which he had sustained in Aspromonte. The waters of Rapolano Terme contain calcium-sulphur-bicarbonate, emerge from the ground at 38°C and are particularly therapeutic for respiratory illnesses, gynaecological, rheumatic and dermatological conditions. Beauty treatments and especially hot mud treatments are also available.

The history of Rapolano begins in the 12 C, when the Counts Scialenga (also called Cacciaconti and Cacciaguerra) of Asciano and Berardenga took control of Rapolano. Rapolano was first mentioned in writing in 1107 in a document showing the Cacciaconti family as local lords. In 1175, they asked Sienna for protection. In 1208, Gualfredotto di Milano captured Rapolano on behalf of Florence. Rapolano was attacked again by Florence in 1233 and 1253 and repeatedly came into conflict between the Ghibellines and the Guelphs. From 1266, there was a Podestà dependent on Sienna. At that time, Rapolano became the main source of wheat Sienna. Wheat deliveries were organised the Santa Maria della Scala Hospital in Sienna and lasted until the 18 C. The city walls were partially destroyed by Sienna in the conflict with Arezzo in 1306 and rebuilt in 1342 as a fortification with five round towers with Siennese assistance. On May 30, 1554, first Armaiolo and then Rapolano were occupied and destroyed by the troops from Florence. The damage left only two city gates, the Porta dei Tintori and the Porta Sant’Antonio and six towers intact. The troops then moved on from Florence to defeat Sienna on 2 August, 1554 at the Battle of Scannagallo. With the defeat of Sienna, Rapolano was also incorporated into the Duchy of Tuscany and remained there (with the exception of the Napoleonic occupation) even after the unification of Italy. Since 1949, Rapolanohas been allowed to use the term Terme (thermal baths) in its name.