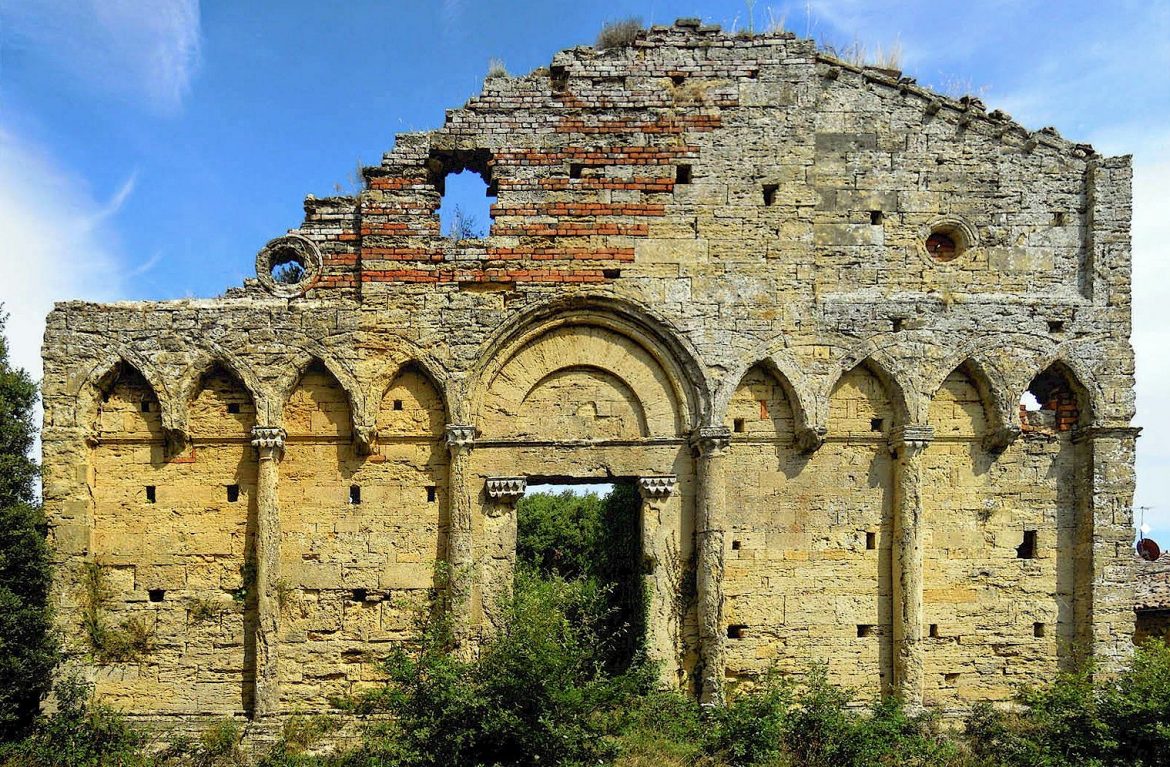 Along the road that leads from the small village of San Dalmazio to the Rocca Sillana, not far from Radicondoli and Pomarance, are the remains of the ancient Pieve di San Giovanni Battista di Sillano (Parish Church of St. John the Baptist at Sillana). The church was a large building, which has been abandoned for centuries and is now reduced to a state of ruin. However, the atmospheric and imposing facade is still visible, giving an idea of the monumental character of the original building. This church is one of the oldest in the diocese of Volterra. In addition to part of the Romanesque-Norman façade, a section of the right side wall remains and the church evidently had three naves. On the façade, the attached semi-columns support pairs of intertwined arches in a style common in southern Italy, but very rare in Tuscany.

The most significant aspect of this imposing construction is undoubtedly the façade, constructed, like the rest of the building, from locally extracted sandstone. The upper part is ruined and some not very successful attempts have been made to repair it using bricks and other extraneous materials. The façade has a base band that is very particular in the Tuscan architectural context. There does not seem to be a remotely comparable example anywhere in Tuscany. The façade, framed by two pillars at the ends, is divided into five sections. The central one, slightly wider than the other four, contains the entrance portal surmounted by a large archivolt, flanked by two “mirrors” on each side. The latter are characterised by the presence of many columns and shelves, which support a motif of blind arches linked together. The result is undoubtedly most atmospheric and resembles examples found mostly in southern Italy and in particular in Sicily.

From a stylistic point of view, the capitals of the columns, made of white marble, seem to belong to the middle centuries of the Middle Ages, between the 10 C and 11 C. They do not look like reused elements, even though they are finely crafted. In any case, one cannot help but notice that, even if they are equal to two by two, they are of three types: those on the left have two acanthus registers and are more compact than those that support the architrave of the portal. In addition, they have their the elements arranged on two orders, while those on the right have a single register, but surmounted by a thick band decorated with geometric motifs. On the pillars located at the ends, a simple frame separates the base part from the highest one.

The shelves, which alternate with the capitals, are made of sandstone. Somehow they must have been completely molded and decorated, but the aesthetic value of these elements has been completely lost due to the severe degradation they have suffered, mainly due to the poor quality of the stone used.

The origin and the year of foundation of this parish are not known, although it is reasonable to assume that, like most parish churches, the foundation dates from late antiquity (5 C – 6C). The first document that certifies it with certainty is an act, registered in March of the year 945, through which Boso, the Bishop of Volterra, confirmed the control of the ecclesia Sancti Quirici et Sancti Iohannis Batiste qui est plebe batismalis Silano site to the presbyter Andrea del fu Cuntrude, with an annual income of 12 silver denarii. A few years later, in June 969, Iohannes and Uuillerado sons of the late Evveradi, promised to the Bishop of Volterra Petrus, before Donatus, an imperial judge, not to cause any prejudice to the income, linked to tithes and to the rights on the burial of the dead, of the Plebe S. Iohanni Batiste and S. Quiliqui Silano site, which evidently were threatened by the activities of the church they owned, dedicated to SS. Regolo e Silvestro, located on site Kampo Roifreduli prope villa de Cugnano. The affiliation of the two lay people is uncertain, even though they probably belong to a collateral branch of the Aldobrandeschi family, while the church of SS. Regolo e Silvestro, which disappeared early on, must have been located a few km south-west of the parish church, in the current Municipality of Radicondoli.

A couple of centuries later, the Pieve di SS. Giovanni Battista and Quirico di Silano appears in the papal bull, sent by Alexander III to Ugone, the Bishop of Volterra, and dated 29 December 1171. In the papal letter, recalling other provisions sanctioned by the predecessors Anastasio IV (in office from 1153 to 1154) and Adriano IV (from 1154 to 1159), possessions and pastoral jurisdiction were confirmed to the diocese of Volterra. In the list of parish churches, the plebem de Silano cum parochibus ecclesiis also appears. The plebem de Silano also appears in the analogous privileium comfermationis of Pope Alexander III, dated 23 April 1179, aimed at confirming the contents of the previous provision.

Castello di Pierle The Castello di Pierle (sometimes known as the Rocca di Pierle) is strategically located near the town of Mercatale, in the municipality of Cortona, in the province of Arezzo, Tuscany, and in its prime was one of the most powerful…
Read More »

The Rocca (Fortress) of Ceserana in the Garfagnana The fortress of Ceserana is located in Garfagnana (Province of Lucca). It is located on a hill on the left bank of the Serchio river. Inside it is a Romanesque church dedicated to Sant'Andrea…
Read More »