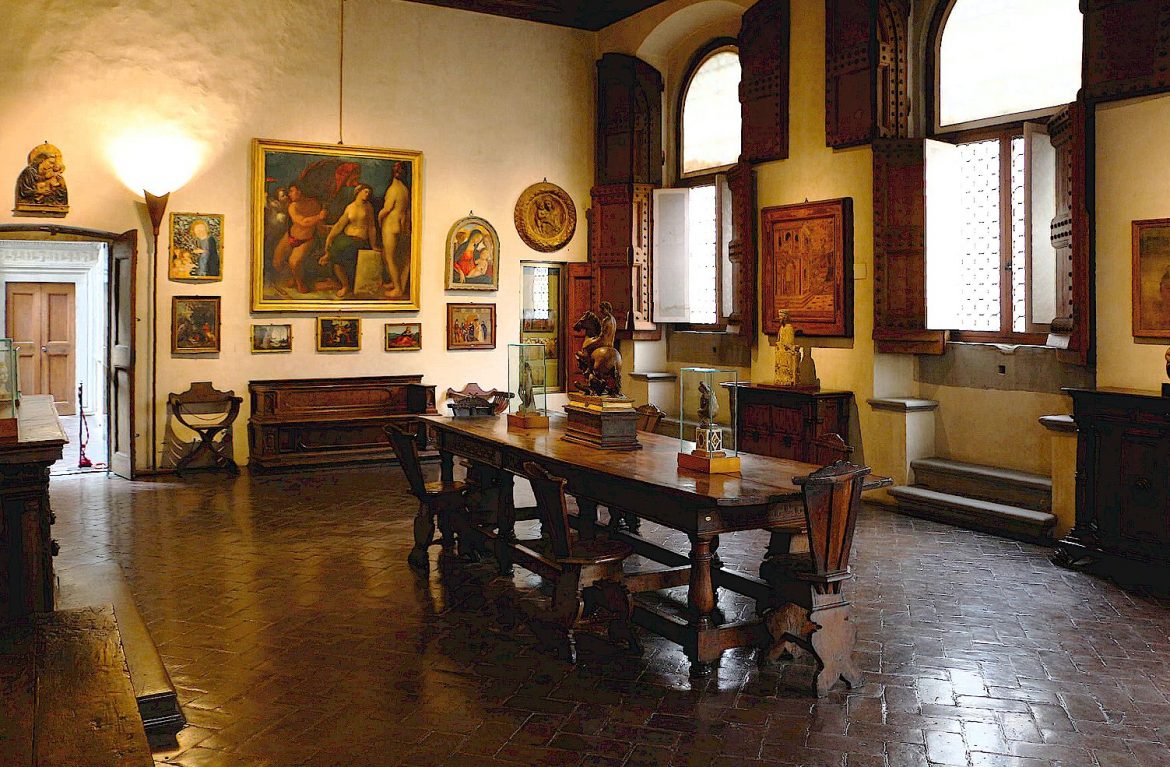 Activities for visitors to Tuscany, History and Culture of Tuscany, Museums in Tuscany, Tuscany travel guide

The Museo Horne is a museum devoted to the 14th and 15th centuries, located in the former Palazzo Corsi, Florence

The Horne Museum (Museo Horne) is located in Florence at Via dei Benci, 6, a short distance away from the Arno and the Ponte alle Grazie, within an easy walk of the major sights around the Palazzo Vecchio. A visit to the gem is highly recommended to anyone bringing to Florence an interest in early Renaissance life and art.

Buildings at the site of the Horne Museum are known from the early 14 C. In 1489, the site with large house was ceded by the Alberti family to Simone and Luigi di Jacopo Corsi. Over the period of 1495–1502, the structure was rebuilt with designs attributed to either Giuliano da Sangallo or more likely Simone del Pollaiolo with the sculptural help of the studio of Baccio d’Agnolo or Benedetto da Rovezzano. In 1911, Horne acquired the Palazzo Corsi, in order to house his early Renaissance collection. He willed his collection and the palace to the State, with the stipulation that it be made into a museum and foundation.

Herbert Percy Horne was born in 1864 in London, where he was trained as an architect, and where he frequented the leading artists and intellectuals of his era. From an early age, Horne showed remarkable artistic and literary gifts, emerging as a poet, graphic artist, critic and fine arts connoisseur. Horne was a poet, architect, typographer and designer, art historian and antiquarian. He was an associate of the Rhymers’ Club in London. He edited the magazines The Century Guild Hobby Horse and The Hobby Horse for the Century Guild of Artists. Horne was closely associated with Arthur Symons and Selwyn Image and their mistress Muriel (Edith) Broadbent. He first visited Italy in 1889 and kept an illustrated journal of his travels and art and architectural research.

After several stays in Italy devoted to his artistic connoisseurship, Horne moved to Florence permanently in 1905, making the city his second home. Joining the colony of foreign intellectuals resident in the Tuscan capital, he dedicated himself entirely to the study of Renaissance figurative art, rapidly establishing himself as a distinguished scholar of Italian art, as well as a refined collector. Among his numerous publications, his 1908 monograph on Sandro Botticelli remains a valuable reference work even today.

Horne set out to realize his dream of recreating, through the display of his own collection, the atmosphere and interior settings of a Renaissance town-house. To do this, in 1911 he bought the Palazzo Corsi, located near Santa Croce, quickly furnishing it with important works with the aim of reconstructing a fifteenth century ambiance. His collection included masterpieces by Giotto, Piero di Cosimo, Giambologna and many other 15 C artists. To overcome his limited financial resources, Horn became active as an artistic consultant, forming profitable relationships with the European and American arts markets, including collaborating with Bernard Berenson, locating works of art for collectors and American museums, one of which was the Metropolitan Museum of New York. This activity had a solid foundation in art history studies, carried out by Horne himself, in the field of Florence Renaissance: he studied Paolo Uccello, Piero di Cosimo, Leonardo, Andrea del Castagno and even to this day his writings on Botticelli dating from 1908 remains the basis of all the studies on this artist

On 12 April, 1916, Horne made his will, confirming that his palace and his art collection be given to the Italian State, and that there would be instituted a Foundation and a Museum dedicated to his memory. Two days after his will and testament were drafted, a violent attack of tuberculosis brought his young life to an end, preventing him from completing the installation of his precious collection. He is buried in the Cimitero Evangelico degli Allori in Galluzzo, a southern suburb of Florence. The Horne Museum opened its doors in 1921.

Horne founded the Riccardi Press, a leading British private press, that issued titles for the Medici Society beginning in 1909 and later under its own imprint.

Lodgings near Florence Since Renaissance times, the inhabitants of Florence have sought tranquility and cool breezes during summer by staying in Tuscan villas and on farms in the surrounding Tuscan hills. This is still an excellent strategy, not just for Florentines but also…
Read More »