You are here:
Home » 40 Top Sights of Tuscany » Tuscan villas and their gardens » Villa dell’Ombrellino 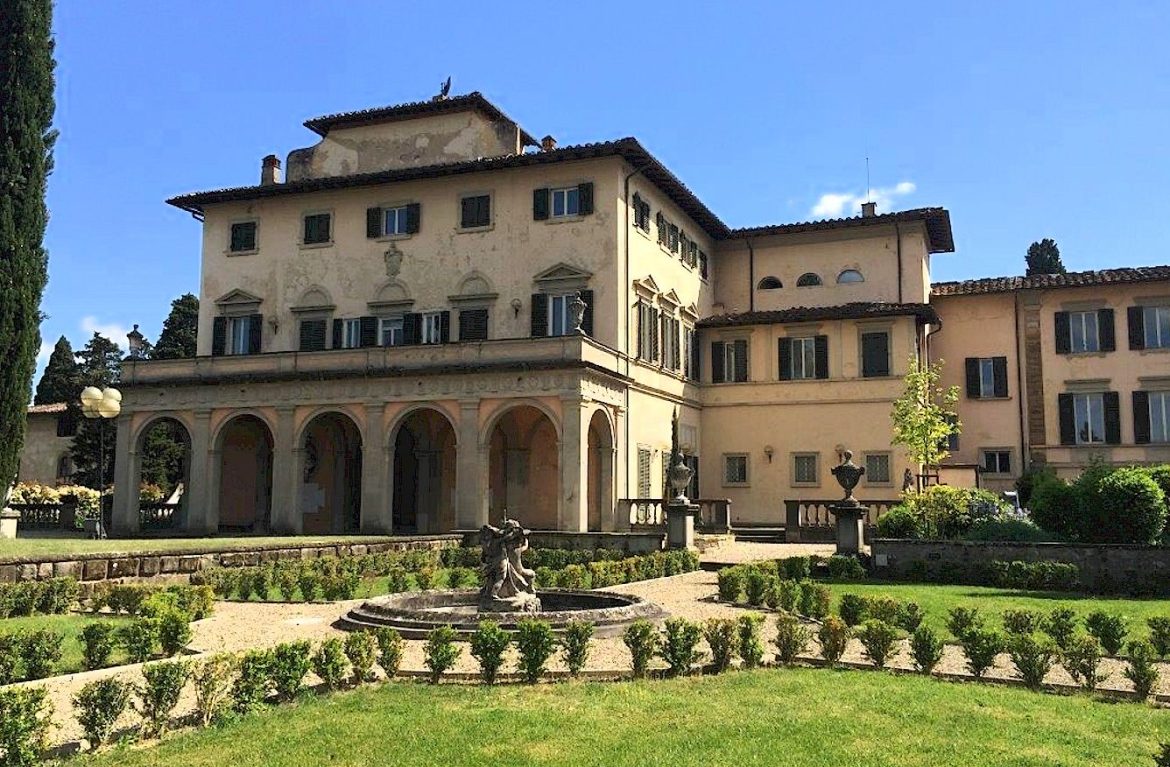 Enthusiasts for the biographies, memoirs and letters of the Anglo-American community in Florence from the 1930’s onwards, will be familiar with Villa dell’Ombrellino as home first to Alice Keppel and then to her daughter, Violet Trefusis, both of them scandalous by the standards of the time.

The origins of Villa dell’Ombrellino date back to 1372. For four centuries, Villa di Bellosguardo, as it was called at that time, named after its location on the homonymous high hill just south of the Arno, was the home of the Segni family, whose most illustrious representative was the historian Bernardo Segni.

The villa was inhabited from 1617 to 1631 by Galileo Galilei who wrote there his Dialogue Concerning the Chief World Systems, before moving to Arcetri. Galileo did not like to live in Florence, and always divided his time between Bellosguardo and Arcetri. Between 1616 and 1617 at Bellosguardo, he performed a series of astronomical observations on the mean motions of the satellites of Jupiter (the Medicean planets). Together with Benedetto Castelli, he also observed the stars in the tail of the constellation of Ursa Major.

In 1815, the villa was purchased by Countess Teresa Spinelli Albizi who had it completely restored. Among many other changes, she added an iron pavilion in the shape of a Chinese umbrella to the large garden terrace overlooking Florence. It was this ombrellino that gave the villa its new name.

In 1874, Villa dell’Ombrellino changed hands to the Russian statesman, Alexei Zubov, who four years later bought the neighbouring Villa Torricella. The merger of the two properties led to a redesign of their two gardens, combined into a single vast romantic park, characterised by numerous exotic species, including palm trees, bamboo, cedars and ginkos.

In the early 20 C, the villa passed to the Englishwoman Alice Keppel, a famous beauty and the mistress of Edward VII. She was exiled from the English court on the death of the king. To widen the panoramic views from her new villa, Mrs Keppel had Villa Torricella demolished. replacing it with a loggia for musical performances. The entire park was strewn with neo-16 C and neo-18 C statues in Vicenza stone, concentrated in particular in the part facing Florence. In 1926 this area of ​​the garden was transformed by the English architect Cecil Pinsent into a giardino italiano, with flower beds edged with boxwood.

On the death of Alice Keppel in 1947, the villa was inherited by her eldest daughter, Violet Trefusis (1894-1972) who remained there until her death. Violet was a writer and essayist who endeavoured to keep the villa and garden as i n her mother’s time, with particular attention to the floral component. (Violet Trefusis’s younger sister, Baroness Ashcombe, putative daughter of Edward VII, was the grandmother of Camilla Parker-Bowles, second wife of Charles, Prince of Wales.)

Violet Trefusis is chiefly remembered for her lengthy affair with the poet Vita Sackville-West, which the two women continued after their respective marriages. This was featured in novels by both parties, in Virginia Woolf’s novel Orlando: A Biography, and in many letters and memoirs of the period, roughly 1912–1922. She was also the inspiration for Lady Montdore in Nancy Mitford’s Love in a Cold Climate and Muriel in Harold Acton’s The Soul’s Gymnasium.

The villa has had many illustrious guests in addition to its famous owners, among them Anna Cora Mowatt known as Mrs. Ritchie, a writer of novels and articles on Florentine life and events for American newspapers, Charles Eliot Norton, a scholar of Italian art and architecture, who stayed at Villa Ombrellino between the end of 1870 and the spring of 1871, and the impressionist painter Marcellin Desboutin stayed there in the mid-19 C.

Four Star Villa Hotel in Chianti Hotel Villa Le Barone is a four star villa hotel located in the Chianti countryside above Panzano in Chianti, halfway between Florence and Sienna, in one of the most beautiful landscapes in Tuscany. Villa Le Barone offers air-conditioned, luxury rooms…
Read More »