You are here:
Home » 40 Top Sights of Tuscany » Abbeys and Churches of Tuscany » Church of San Giovanni Maggiore at Borgo San Lorenzo, Tuscany 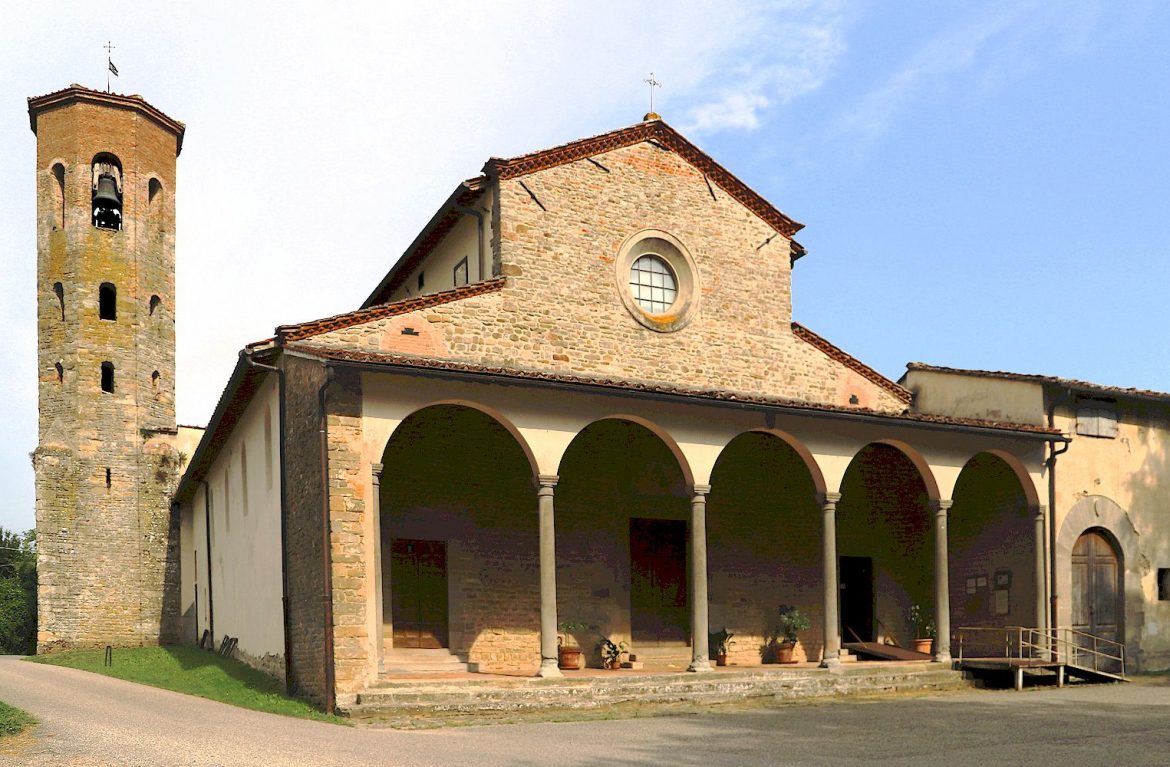 The Church of San Giovanni Maggiore is located about 3 km away from Borgo San Lorenzo. It can be reached on foot along a cypress-lined pathway. The facade of the church is embellished by a loggia renovated in the 20 C. The bell tower, known as the “Campanile Alberto”, is quite famous. This campanile, which dates back to the year 1000, has a square base and, from about half of its height of 23 m, its cross-section becomes octagonal. Each side of the octagon houses three single-lancet windows and culminates in a sloping roof made of red tiles. The bell tower owes its name to the patron Aliberto Quarquagli Gigliolini, of Florentine origin, who financed its construction

The Church of San Giovanni Maggiore was rebuilt in 1520-1530 by the Archbishop of Florence, Francesco Minerbetti, and restored in 1930. Its origins are obscure although most likely it dates back to the 5 C – 6 C. This is evidenced by documents of the 11 C that cite a castellare novum or castellarium novum, which indicates the existence of an older castle, built on the remains of the first. In the Monastery of San Pietro in Luco, mention is made of a sale of goods from this church, dated 1016.

The interior has three naves and a Romanesque ambo with green marble decorations from the 12 C. It houses a wooden crucifix from the first half of the 16 C, plaster copies of two busts representing the mother and father of Francesco Minerbetti (the 16 C terracotta originals are kept in the Beato Angelico Museum in Vicchio), plus another bust depicting the parish priest Fratini.

The church furniture is also found in the Vicchio Museum and consists of chasubles, a 13 C Byzantine chalice, a silver cup, a silver reliquary, a walnut bench, a canvas depicting the Saviour, by Salvator Rosa, a painting including a depiction of Saint John the Baptist (school of Giotto), and a bronze crucifix attributed to Giambologna.

The painter Pietro Alessio Chini painted the Baptism of Christ on the central vault of this church. The decorator Dino Chini (1884-1960) painted a festoon with oak and laurel leaves surrounding a plaque in memory of the veterans of the Great War, on the right wall of the church as you enter.

Under the main altar, is the inlaid marble sepulchre of the Blessed Giovanni da Vespignano.

More about the abbeys and churches of Tuscany.

Castello di Pierle The Castello di Pierle (sometimes known as the Rocca di Pierle) is strategically located near the town of Mercatale, in the municipality of Cortona, in the province of Arezzo, Tuscany, and in its prime was one of the most powerful…
Read More »