You are here:
Home » 40 Top Sights of Tuscany » Tuscan villas and their gardens » Villa di Poggio a Caiano 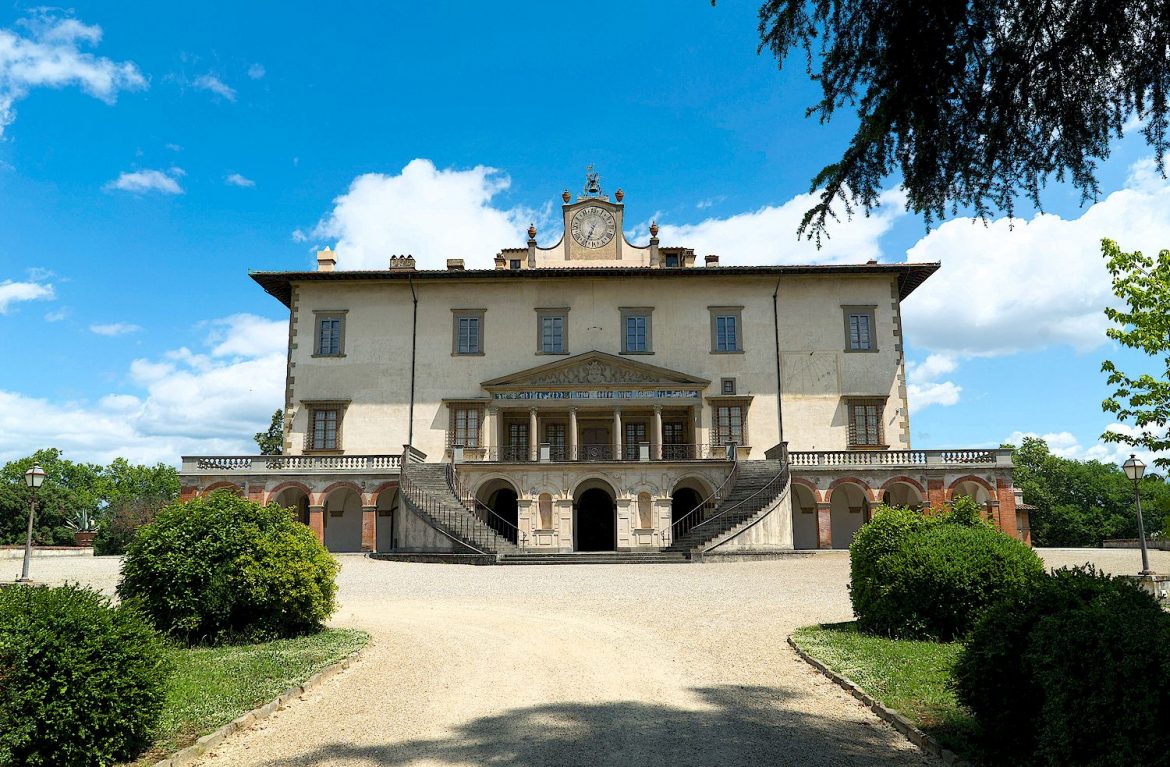 Towns in the Province of Prato, Tuscany, Tuscan villas and their gardens, Tuscany travel guide

The Medicean Villa of Poggio a Caiano, also known as Villa Ambra, is located in the Province of Prato, in the town of the same name. The villa is a splendid example of the villas built by Lorenzo de’ Medici “il Magnifico” and today it contains two museums, the historic apartments on the ground and first floors, and the Museum of Still Life on the second floor.

The Villa of Poggio a Caiano is situated on a slight rise, the last offshoot of the Montalbano mountains, on a promontory extending towards the Ombrone river and dominating the road between Florence and Pistoia. It was built by Lorenzo de’ Medici after a period of intensive land acquisition by the Medici family, in the area of Poggio a Caiano and also on the other bank of the Ombrone River, at Tavola, between 1470 and 1474. Lorenzo commissioned Giuliano da Sangallo to build a villa that became the prototype of Tuscan noble residences for several centuries. Lorenzo was among the first to conceive of an agrarian estate arranged according to the requirements of harmony, with the villa itself merging seamlessly with the surrounding agricultural area. This development lead directly to the waning of the villa-fortress such as the Medici Villa of Careggi, which is more like a castle than a villa and yet was built only thirty years previously by Michelozzo for Cosimo the Elder, the grandfather of Lorenzo. This new attitude was facilitated by the period of peace and stability achieved by Lorenzo’s politics, as well as by the influence of humanist philosophy. The lunette of Poggio a Caiano painted by Giusto Utens gives an excellent impression of how the villa was integrated into its gardens and farms soon after it was completed, and how the new giardini all’ italiana were designed to reflect the symmetry of villa architecture.

The Villa of Poggio a Caiano is definitely worth a visit by anyone interested in early renaissance architecture.

Villa di Poggio a Caiano in the 15 C

Among the innovations introduced right at the start of construction were the porch being placed on the ground floor to form an interconnection between the villa interior and the surrounding farm, the classic porch and pediment on the noble floor and the lack of a central courtyard. The fresco by Filippino Lippi under the loggia on the first floor dates back to this period .

Upon the death of Lorenzo in 1492, the work at the villa was still largely unfinished and was halted between 1495 and 1513 because of the exile of the Medici from Florence. Only a third of the villa was completed by this stage: the base, the porch and the floor planks of the first floor of the vault intended to cover the central salon.

Villa di Poggio a Caiano in the 16 C

Between 1513 and 1520, after the return of the Medici to Florence, the construction of Villa Poggio a Caiano was completed by Giovanni, the son of Lorenzo the Magnificent, by this time elevated to become Pope Leo X. The vault of the central hall on the first floor was decorated with the papal coat of arms. The frescoes of the salon were initiated by the greatest Florentine masters of the time: Pontormo, Andrea del Sarto and Franciabigio. The paintings were completed some fifty years later by Alessandro Allori.

The villa was the site where foreign brides of Medici family members were welcomed, including the weddings of Alessandro de’ Medici and Margaret of Austria (1536), Cosimo I and Eleanor of Toledo (1539), Francesco I and Bianca Cappello (1579). The notorious deaths of Bianca and Francesco occurred in Villa Poggio a Caiano – poisoning was suspected.

In 1661, Marguerite Louise d’Orléans, Cousin of Louis XIV and wife of Cosimo III came to Florence. The princess, profoundly different from Cosimo’s dark and ultra-religious character, and at odds with the Grand Duke’s mother Vittoria della Rovere, was never happy with her marriage or with Tuscany. She wanted to return to France, and after years of strife went to live at Poggio a Caiano in 1672 or 1673, under guard to prevent her leaving for France. Marguerite Louise returned permanently to France in 1675.

During this period, the architects Giuseppe and Giovan Battista Ruggeri attended to a general restoration, including the renovation of the theatre and placing a clock on the facade.

During the 19 C, the theatre of the villa became remarkably popular, with concerts including Giovanni Paisello, Etienne Nicolas Méhul and Gaspare Spontini.

In 1811, Elisa Baciocchi commissioned Giuseppe Manetti to design new English Gardens, featuring irregular avenues, a pond and small neoclassical pavilions, such as a conical glacier and a temple of Diana. The project was only completed later and partially.

In the 1828, the sundials were arranged on the sides of the building, while the interior of the villa was updated with fine furnishings from the royal palaces of Modena, Piacenza, Parma, Torino, Lucca and Bologna.

During the Second World War, the villa was used to store important works of art from all over Tuscany, including the statues of Michelangelo and the Monument of the Four Moors of Livorno.

In 1984, Villa di Poggio a Caiano became a national museum and since , thanks to a valuable inventory dated 1911, the interior of the villa has been re-constructed as much as possible, recovering all the objects, furniture and artwork scattered among the various museums and state depots. The restoration was concluded in 2007 with the opening to the public of the second floor, where the Museum of Still Life is housed, in which the great paintings of Bartolomeo Bimbi as well as other works from the Medici villas of Castello, Topaia, Ambrogiana etc are displayed.

Scenes of the film “Darling” (1965), directed by John Schlesinger, were shot in the villa and in the gardens. Click here for more films shot in Tuscany.)

The interior of Villa Poggio a Caiano

On the piano nobile, the majestic Sala di Leone X preserves almost intact one of the most important cycles of Tuscan frescoes from the 16 C by Pontormo, Andrea del Sarto, Franciabigio and Alessandro Allori. The frescoes of neoclassical painter Luigi Catani are in the entrance hall on the first floor and in seventeen rooms of the villa there are further works by artists who collaborated with Catani.

On the second floor, in the Still Life Museum, around 200 paintings belonging to the Medici collections are exhibited.

Villa medicea di Artimino The Medicean Villa of Artimino, also called "La Ferdinanda" or "the Villa of the hundred chimneys", is one of the most famous of the Medicean villas of Tuscany, in no small part because of the large number of chimneys on…
Read More »