Colle di Val d'Elsa in the valley of the River Elsa

You are here:
Home » Towns in the Province of Sienna, Tuscany » Colle di Val d’Elsa 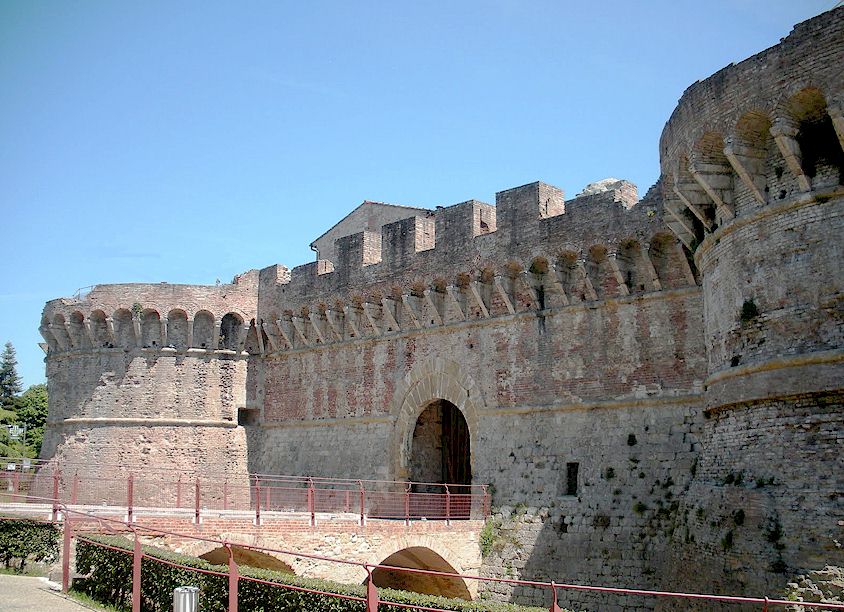 Sights and accommodation at the Tuscan town of Colle Val d'Elsa

Colle di Val d’Elsa is located in the province of Sienna on a high hill overlooking the valley of the river Elsa, in central Tuscany. The town was probably founded during the Dark Age, sometime before the 10 C when it was first documented. During its early history, Colle di Val d’Elsa was ruled by bishops and later became a fief of the Aldobrandini family. In 1333, it fell into the possession of the Florentines. From the mediaeval period onwards, Colle di Val d’Elsa was famous for its wool production and paper manufacture, and from the 15 C onwards, it was also an important centre for printing and for the manufacture of glass bottles, an industry that later evolved into the production of crystal glass for which the town is still famous. Wool, paper and glass production all relied on the waters of the Elsa, both for cleaning and as a source of power, exploited by way of a system of channels called gore, which exist to this day.

Colle val d’Elsa is divided into two parts: the mediaeval Upper Colle Val d’Elsa which was known as Castelvecchio, and Lower Colle Val d’Elsa, which suffered much damage during WW II and has since been rebuilt and enlarged to accommodate light industry, shops and residential areas.

The ancient Upper Colle di Val d’Elsa preserves 14 C and l6 C walls and buildings, the huge, Renaissance Porta Nuova and other atmospheric sights of interest to visitors. Among these are the 16 C Palazzo Campana and the arched bridge that connect Borgo Santa Caterina with the Castello. Along the Via del Castello, visitors will see numerous ancient houses, towers andpalazzi dating from the 15 C and 16 C, as well as the Duomo, which was constructed in 1600 on the site of a previous Romanesque church, and thePalazzo Pretorio, dating from 1355.

Worth a visit. More about Colle di Val d’Elsa.

Radicondoli Radicondoli is a tranquil Tuscan hill town that lies well off the beaten tourist track in the northern part of the “Metalliferous Hills” on the borders of the Alta Maremma, between the Val d’Elsa and the Val de Cecina. …
Read More »

Arezzo Arezzo is an attractive town located high on a hill above the upper reaches of the River Arno in eastern Tuscany. The cathedral, the town hall, the Medici Fortress and numerous other architecturally interesting structures are in the ancient higher area of Arezzo.…
Read More »