You are here:
Home » Vacation accommodations in Tuscany » Luxury Hotels in Tuscany 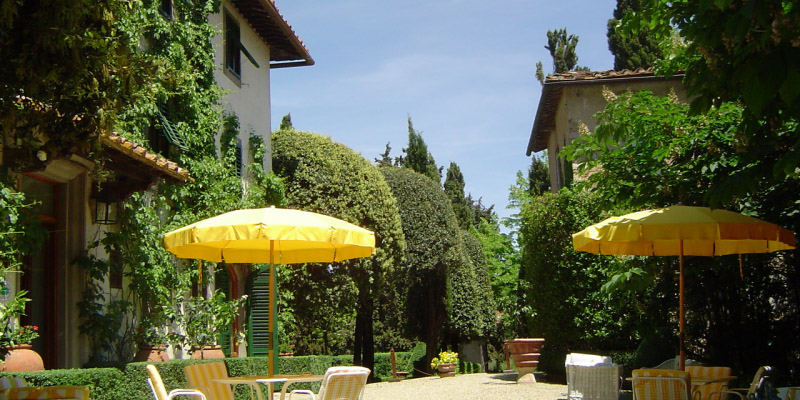 Villa and Boutique Hotels in Tuscany

Italy is famous for its magnificent Tuscan villas, some of them dating back to the Renaissance. Many remain in private hands, others are now museums and institutes, and a few have been converted into hotels that preserve not only the structure but also some of the ambience of life in a great country house. Here we present four of the most attractive villa hotels in Tuscany, all within easy reach of Florence and Sienna.

Villa Le Barone was built in the middle ages on the remains of a Roman fort as a baronial defence tower in Tuscany, hence the name “Le Barone”. During the 16 C, it was bought by the Florentine della Robbia familyof ceramicists and was restored after the First World War by Marchesa Maria Bianca Viviani della Robbia, first as a Tuscan wine estate and later as a hotel. Great care has been taken to retain the character of a private residence with cheerful bedrooms and sitting rooms, antique furniture, paintings, books and family heirlooms. Villa Le Barone offers 28 individually decorated rooms. There is a swimming pool and tennis court, as well as the guests’ restaurant, a television lounge and terraces with panoramic views.

Villa Bordoni Hotel and Restaurant near Greve in Chianti

Villa Bordoni luxury country hotel provides four star accommodation with a gourmet restaurant and a wine cellar, a swimming pool and extensive garden. The 18th century Villa Bordoni was restored as a boutique hotel in 2005 by David Gardner, the founder and owner of the successful Florentine restaurants ‘Baldovino’ and ‘Beccofino’. Villa Bordoni offers three suites, one cottage and six double bedrooms, and has a fine gardens and several hectares of olive groves surrounding it.

Villa Gamberaia at Settignano on the outskirts of Florence

Villa Gamberaia is one of the most famous of the Tuscan historical villas. The villa was constructed in the early 1600s and is noted for its magnificent gardens. Villa Gamberaia is located in the Tuscan hills on the outskirts of Florence at Settignano, about fifteen minutes by car from the centre of the city, in an exceptional position overlooking the Arno valley. The unique garden plan and setting in the Tuscan landscape have been celebrated by architectural historians and garden designers throughout the centuries. Now it is possible to stay in the villa itself or in the farmhouses within the grounds, in magnificently furnished suites and apartments.

More about a vacation at Villa Gamberaia.

Vitigliano Relais and Spa near Panzano in Chianti

Vitigliano Relais and Spa is a unique private hotel with spa, wellness and fitness facilities, located near Panzano in Chianti, almost exactly halfway between the art cities of Florence and Siena, in Tuscany, Italy.Vitigliano offers seven spacious and luxurious suites that can be rented individually or all together. All guests have access to the 15 m swimming pool, hammam and wellness treatment opportunities, as well as the gourmet chef. Vitigliano offers the perfect ambience for those who appreciate exclusivity, ecological sustainability and healthy living, and who place value on personal service of the highest level for very special family or friends get-togethers, management meetings and retreats (sport, yoga, well-being).

More about Vitigliano luxury vacation accommodation and spa in Tuscany.

Castelleto di Montebenichi is a neo-gothic palazzo located in the tiny borgo of Montebenichi, located on the hill top with magnificent views,  halfway between Sienna and Arezzo. The Castelleto offers four luxury apartments, within the palazzo which is exquisitely decorated with antiques and works of art. Guests have access to the common areas of the palazzo as well as the gardens and swimming pool.

For a complete range of hotels in Tuscany, click here.

Houses for sale in Tuscany Antonella Bonatti founded ITALHAUS Immobiliare in 1988. Our office is located in the heart of the Chianti Classico wine zone, in the historical main piazza of Greve in Chianti, halfway between Florence and Sienna. Whether you are searching for a…
Read More »

Bed and Breakfast in Chianti One of the most convenient forms of accommodation in Chianti and Tuscany is a Bed and Breakfast (B&B) in Chianti. These can be located in both the countryside and the small towns and villages of the Chianti Classico wine territory…
Read More »

Tuscany Vacation Rental Agencies Booking your holiday accommodation in Tuscany directly with the property owner via a web site is not for everyone. If you feel that inexperience with the internet, language limitations or a desire to work with someone who has first-hand knowledge…
Read More »