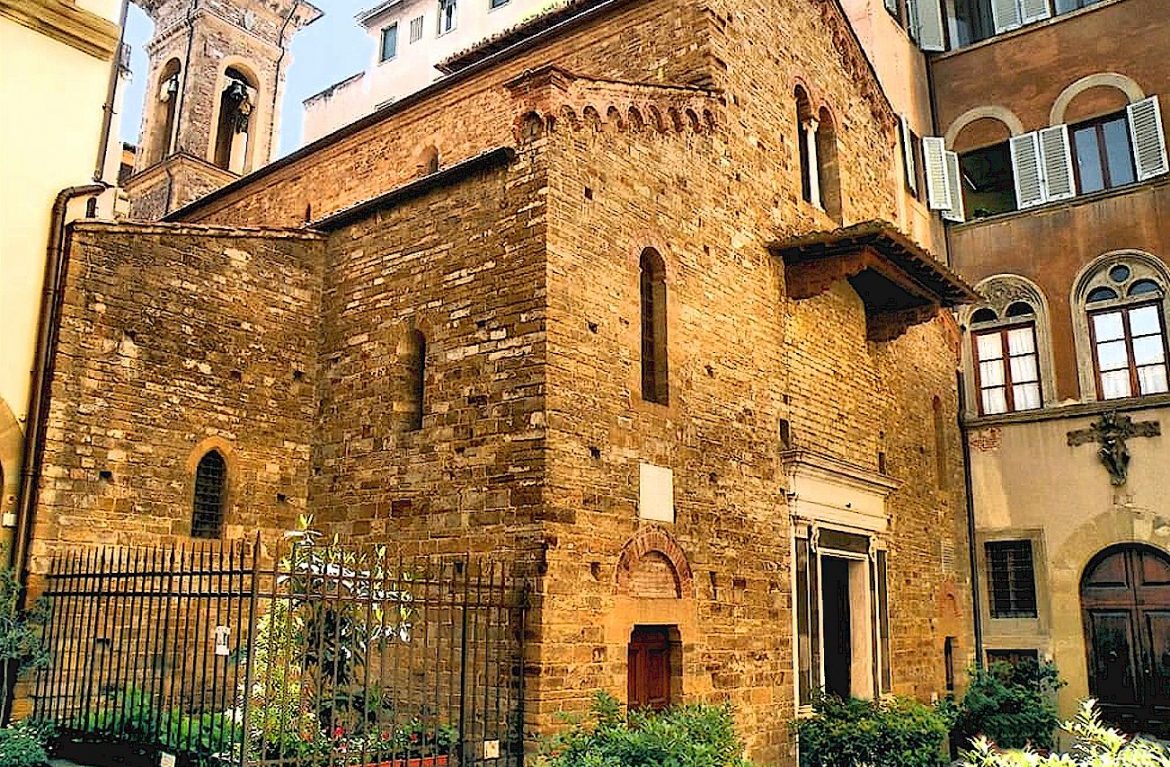 The Church of the Holy Apostles, Florence

The Church of Santi Apostoli (Holy Apostles) is located in Piazza del Limbo in Florence and dates from the 11 C. It is one of the oldest and historically rich churches in Florence. The church of Santi Apostoli is where some of the oldest legends of Florence have their roots and it is central to popular festivals such as the “explosion of the cart”, earning it the popular nickname of “Old Cathedral of Florence”, despite never having been the Florence’s cathedral.

A plaque on the façade suggests that the church was founded as long ago as the year 800, in the presence of none other than Charlemagne and Paladin Orlando. In fact, the Church of Santi Apostoli was built in the 11 C in Florentine Romanesque style, in an area that was then outside the city walls, along the route of the ancient Via Cassia, corresponding to the current Santi Apostoli village, which from the church takes its name.

The façade of Santi Apostoli is in Romanesque style with a 16 C portal attributed to Benedetto da Rovezzano of Pistoia. It overlooks the small Piazza Limbo, so called because in ancient times it housed a cemetery for children who had died before being baptised, and who, as Dante also describes in the Divine Comedy, remained in an indefinite area of ​​the afterlife called limbo. The small bell tower is by Baccio d’Agnolo from the 16 C.
The plan is influenced by the early Christian style, with columns in green Prato marble and diverse capitals recovered from Roman buildings. The first two, in Corinthian style, are thought to come from the Roman thermal baths that stood nearby and date back to the 1st century BC. The wooden ceiling with a richly decorated trestle entablature dates back to 1333. The floor with a primitive mosaic was recovered during restoration and includes numerous tombstones of members of illustrious Florentine families (Acciaiuoli, Altoviti, Del Bene etc.). The apse area has a simple Romanesque structure with rough square stones left exposed. The simplicity of the interior with the rounded arches supported by the columns is said to have inspired Brunelleschi in his recovery of the classical forms which led to the Renaissance style. The side chapels date back to the 16 C and do not clash with the whole because they are rather small and sober.

At the bottom of the left aisle stands a valuable tabernacle in polychrome majolica by Andrea della Robbia, while in the first part of the left aisle there is a small niche that houses the stones, according to the tradition brought by Pazzino de ‘Pazzi from the Holy Land after the first crusade. , with which on Easter day of each year the fire is solemnly lit that ignites the dove for the traditional burst of the cart in Piazza del Duomo.

Details of the interior of the Church of Santi Apostoli

On the left aisle, starting from the entrance:

In the right aisle:

Hermitage of San Salvatore (Holy Redeemer) of Lecceto The Monastery of the Holy Saviour at Lecceto in Tuscany, commonly known as the Eremo di Lecceto, was the principal House of the order of the Hermit Friars of Saint Augustine in 1256, when Pope Alexander IV constituted the Augustinian…
Read More »