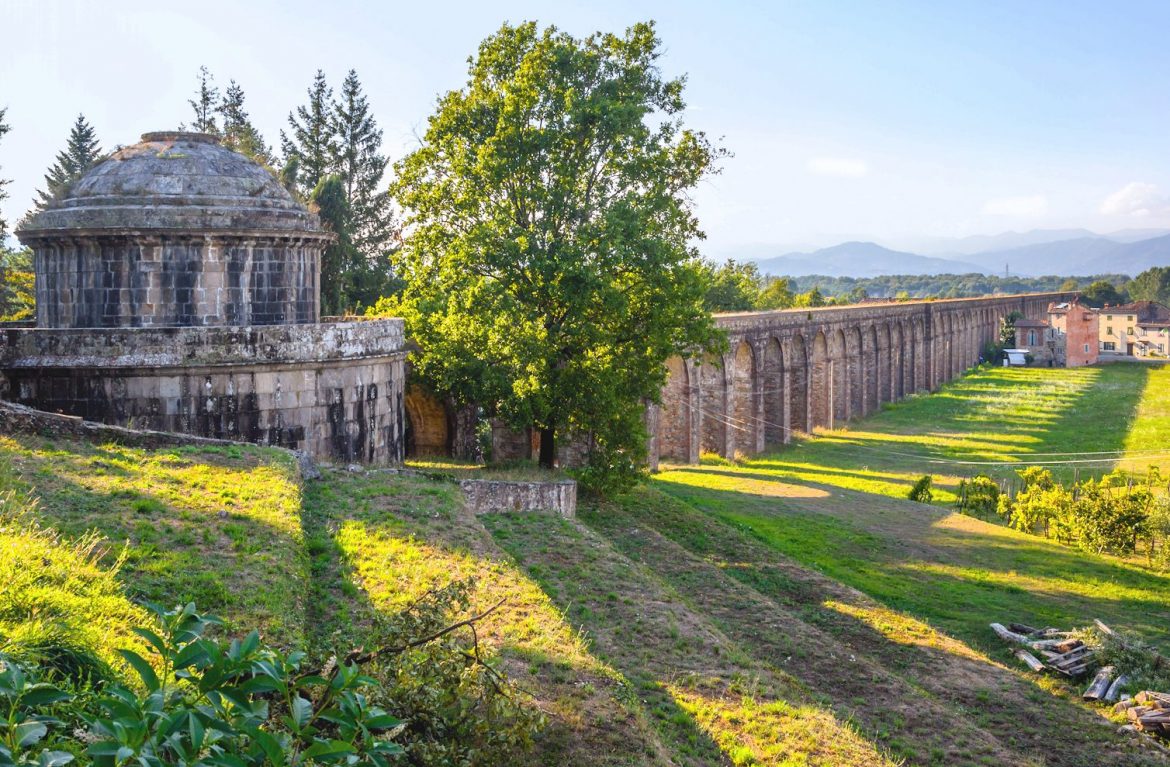 The Acquedotto del Nottolini is often mistaken for an ancient Roman aqueduct, but in fact construction began in 1823 according to the design of the architect Lorenzo Nottolini, under the rule of Maria Luisa of Spain, Duchess of Lucca, and continued until 1851. In the slopes of Monte di Vorno, a number of springs were conveyed through rocky channels to a domed circular stone temple-cistern which is located near San Quirico in the frazione of Guamo. The water was then conveyed northward through covered stone conduits to the temple-tank of San Concordio, just outside the fortified walls of Lucca. The arches were mainly constructed of brick. From the San Concordio tank, potable water was led by metal pipes into fountains in the city, starting with the circular fountain in Piazza Antelminelli next to Lucca cathedral. The flow of water was governed entirely by gravity. The final iron conduits were designed to allow for expansion and contraction of the metal in response to temperature changes.

There are several walking trails in the area of the Acquedotto del Nottolini including one that starts at the springs that supply water to the system. This trail passes a number of inspection sites and then follows the aqueduct itself.

In Roman times there might have been an underground aqueduct in Lucca, starting from the Moriano area and feeding some fountains within the walls of Lucca walls. Over time, these water sources were depleted and for centuries the city of Lucca used wells.

During the Enlightenment, the importance of using an aqueduct for reasons of hygiene emerged. In 1732, Giuseppe Natalini made a study to draw water from Badia di Cantignano but, in 1763 it was decided to take it from the mountains above Guamo. The works, however, never really got off the ground. Finally, in 1822, Maria Luisa di Borbone, Duchess of Lucca, approved the construction of the aqueduct, entrusting the royal architect Lorenzo Nottolini with this task. The work began in 1823 and lasted until 1833. Today the aqueduct is still architecturally intact, except in the section crossed by the A11 motorway, but it is no longer used as a water supply.

The route of the Nottolini aqueduct

According to the project by Lorenzo Nottolini, the water taken from about 18 pure sources of the Serra Vespaiata, Rio San Quirico and Rio della Valle, was conveyed to the Tempietto di Guamo, a circular building in Doric neoclassical style [2]. From here it was further purified and made clear by the subsequent passage of gravels and stones, as well as the crossing of many holes and barriers used to further deposit the impurities. The Serra Vespaiata spring is called “Alle parole d’oro” because the peasants exchanged the brass letters that covered some writings on the aqueduct for gold.

The pipelines extend for 3.2 kilometers on a structure about 12 meters high and supported by 460 brick and masonry arches that support two water channels on the top. Nottolini created two different water routes, depending on their origin: the spring waters were sent through a privileged route to the numerous public and private sources of Lucca, while the waters of San Quirico and the Valley went to feed the fountains monuments of the city. Nottolini therefore allocated the water differently according to its quality, directing the purest water for drinking purposes. The temple-cistern of San Concordio, at the gates of Lucca.

Every seventeen Nottolini arches inserted a buttress for both decorative and structural functions. During the twentieth century, 6 arches were demolished, interrupting the aqueduct line in order to allow the passage of the A11 motorway between the Lucca and Capannori toll booths.

Initially the aqueduct was supposed to bring the water directly into the walls of Lucca, but Nottolini modified the initial project by eliminating the 46 final arches towards the Baluardo San Colombano, in order not to compromise the architectural integrity of the walls themselves.

The aqueduct therefore ends in the Tempietto di San Concordio which is actually a cistern built from 1823 to 1825: it is a circular building in the Doric neoclassical style, where water was collected in a double marble basin. From here the water was forced through huge metal pipes towards Lucca where it fed the complicated system of fountains.

The interruption of the aqueduct

During the Fascist era, in the years between 1928 and 1932, the stretch of the A11 motorway that connects Florence to Pisa was built. It was necessary for the highway to pass through the aqueduct, so one of the arches was removed and the passage of the canalised waters was re-established by creating a completely new arch different from the others. The highway then consisted of a single lane of about 8 m wide and therefore the removal of a single pillar was sufficient to allow the passage of the A11. In 1944, during their retreat, the German troops made the aqueduct collapse to block the highway and slow down the advance of the allied troops. In 1962, another five pillars were removed when the A11 was doubled in width.