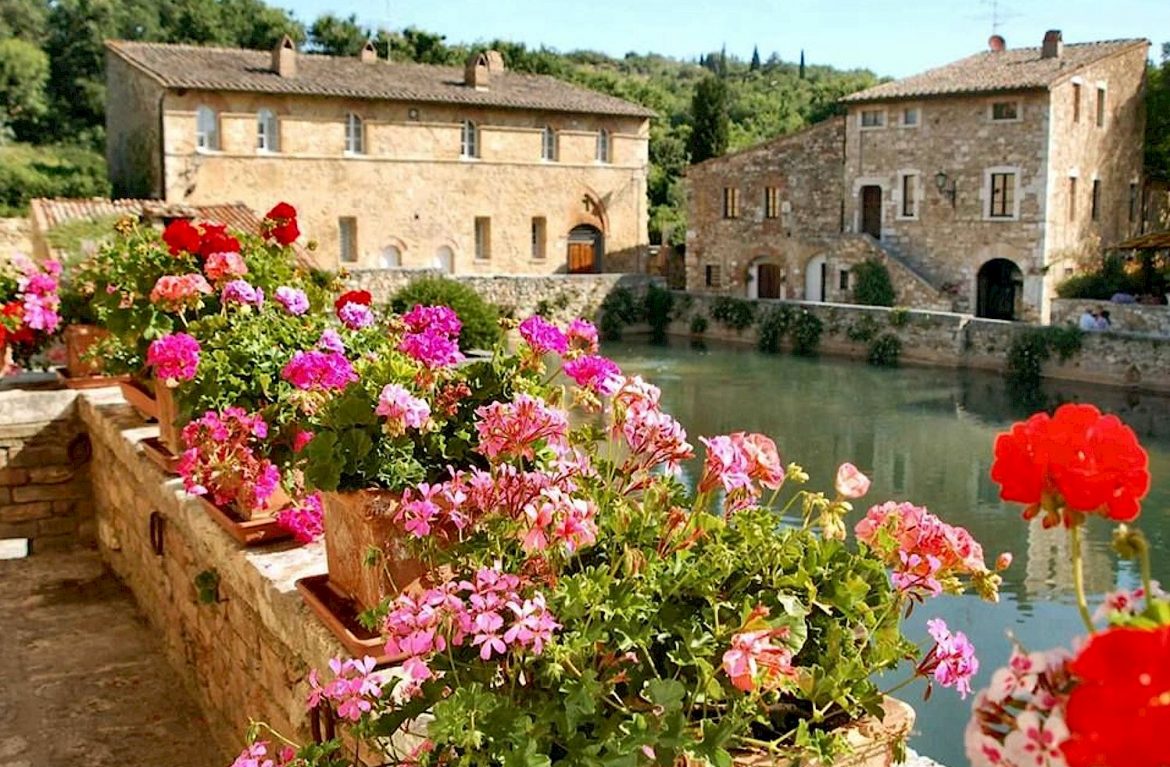 Bagno Vignoni (sometimes Bagni Vignoni) is famous for its thermal baths. It was popular with the Romans (and probably the Etruscans) and rose to prominence again during the middle ages because of the proximity of the Via Francigena, the north-south pilgrimage route through the Italian peninsula. The ancient square pool at the centre of Bagno Vignoni is no longer in public use, but the scene is extremely attractive, with old stone buildings surrounding the pool on all sides. Today, the modern thermal baths are operated by the municipality of San Quirico d’Orcia and offer a wide range of therapies, including mud baths, for arthritis and rheumatism.

Hotels in the Val d’Orcia

Do you prefer the security of booking your vacation rental
accommodations via a highly reputable agency? Click here for a selection of the best hotels and rural vacation accommodations in the Val d’Orcia of Tuscany.

Bagno Vignoni first became a spa in the Middle Ages and in spite of the many wars and devastation which took place in the Val d’Orcia the appearance of the village has remained almost unchanged to the present day. Bagni Vignoni has such allure that it definitely merits a visit. The village lies in the municipality San Quirico d’Orcia, in the province of Sienna and is built around the great pool which constituted the spa. Here the centre of the village is a pool rather than a square, and this makes the place truly unique. Today it is no longer possible to use this pool – the modern baths are a few hundred metres from the old village centre. It was highly renowned and was frequently visited by illustrious personages such as St. Catherine, Pius II Piccolomini and Lorenzo the Magnificent who stayed here in 1490. In the 16 C, a Sienese scholar, Lattanzio Tolomei, dedicated verses in Greek to the Nymphs. These were inscribed on a stone which can still be seen on one of the pillars of St.Catherine’s loggia. The Russian film director Tarkovsky, of “Solaris” fame, shot some scenes for his film “Nostalgia” in Bagno Vignoni.

Worth a visit. More about Bagno Vignoni.

Monteriggioni Monteriggioni is one of the most famous and attractive castles in all Tuscany. Its curtain wall and fourteen towers are virtually intact, and the interior is now occupied by a small and peaceful village. …
Read More »

Val d’Orcia The Val d'Orcia is one of the most diverse and yet distinctive areas in Tuscany, Italy, and the landscape of the Val d'Orcia has been designated a UNESCO world heritage centre. The Valdorcia is more than just the valley of…
Read More »

Volpaia Volpaia is a well-restored mediaeval village located in central Chianti. Part of the walls and two of the original six towers of Volpaia are preserved, the largest of the two housing the Castello di Volpaia wine shop and osteria. Volpaia…
Read More »