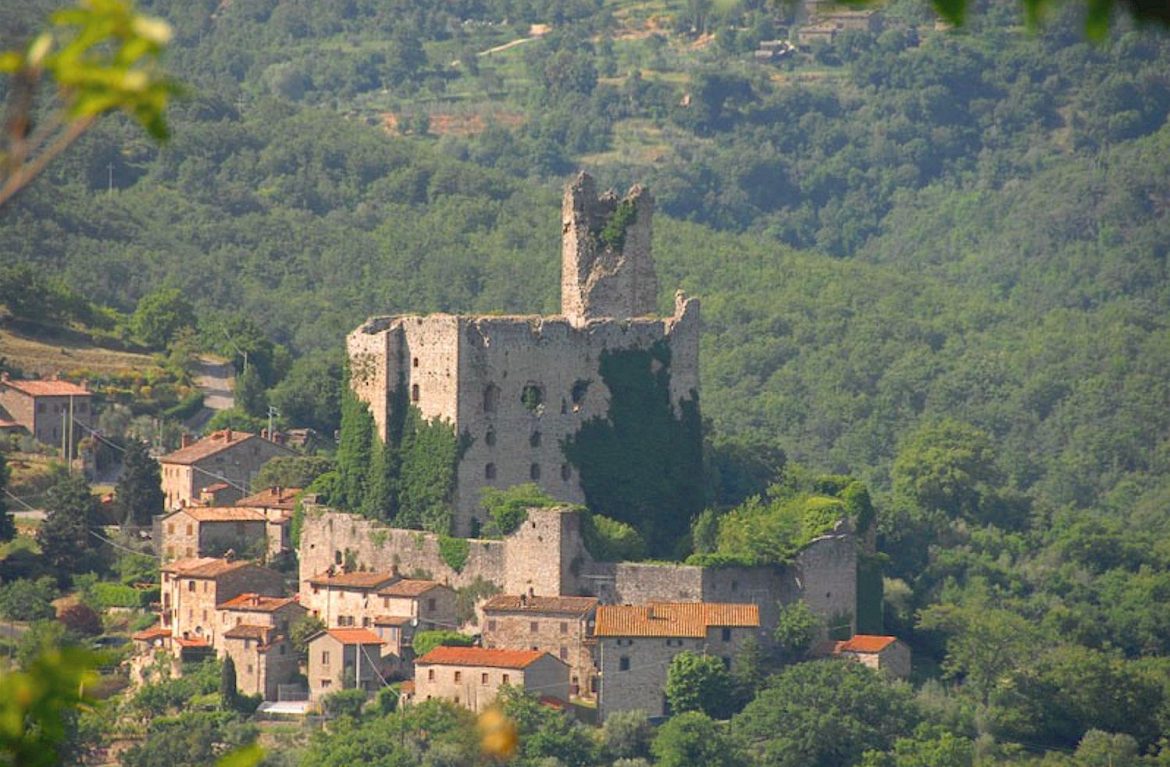 The Castello di Pierle (sometimes known as the Rocca di Pierle) is strategically located near the town of Mercatale, in the municipality of Cortona, in the province of Arezzo, Tuscany, and in its prime was one of the most powerful fortresses in the region, since it dominated a unique route between the Val di Chiana, Lake Trasimeno and Valtiberina. The earliest fortifications on the site were probably constructed sometime during the 10 C and the present castle was built on the foundations of this earlier structure around the year 1371.

The first documentary evidence for the existence of a “Rocca di Pierle” dates from October 1098 and is the will of Enrico, son of Ugo, Marchese di Monte Santa Maria, who, having fallen seriously ill in his castle of Pierle mentions it among his legacies. From then on control of Pierle bounced back and forth between Cortona and Perugia with periods of effective independence in between. In 1202, after a period of prosperity, the Marchesi del Colle (Monte Santa Maria) were forced to surrender the castle to Perugia due to famine. Just a few years later, in 1217, we find the Marchesi del Colle submitting to the lords of Cortona, who then took control of Pierle. In 1225, the Oddi of Perugia came into possession of Pierle thereby removing it from the control of Cortona. By 1236, Pierle once more belonged to the Casali, lords of Cortona, but at some stage it reverted to the Oddi family. By 1325, we read that the Casali family were ruling Cortona without being accepted by populace. The Casali had the title of “vicari imperiali” and exercised power in large part for their own benefit. Subsequent events indicate that they continued in this vein for several decades. On the 11th of August 1369, the peasant farmers of Pierle rebelled and assaulted the palazzo of the Casali in Mercatale and looted the storehouses. (A foretaste of the revolt of the Ciompi in Florence, nine years later.) As a result of this, the Oddi of Perugia decided to dispose of the assets they held in the Valdipierle and they sold the castles of Pierle and Lisciano to Francesco Casali. This event is recorded in their accounts of 1370.

In 1371, Francesco Casali constructed the present castle on the ruins of the old one. The new castle or rocca was intended to be a haven for the lords of Cortona, whither they could flee to seek safety during the periodic disorders that erupted in this border area. The design of the new castle was developed by Ranieri Casali, one of the sons of Francesco, who, being a knight of Rhodes, had some experience of military architecture. In fact, the defences are quite sophisticated and have served the castle’s inhabitants well.

Four years later, on the 26th of July 1375, Francesco Casali died and his powers were transferred to his son Nicoló Giovanni, who was only nine years old. In 1384, Nicoló Giovanni died of the plague and was succeeded as ruler of Cortona by his eight year old brother Francesco Senese Casali, under the tutelage of Ilario Grifoni. In 1387, Uguccio Casali became lord of Cortona by removing Francesco Senese from power on the grounds that he was not old enough to rule and nor to fight against neighboring Perugia. Uguccio Casali fought vigorously against the lords of Perugia and in 1394 conquered the Castle of Pugnano, capturing and imprisoning in Pierle the Marchese Carlo degli Oddi and his children. On the 11th October 1400, Uguccio Casali died and was succeeded at Cortona by Francesco Senese Casali. This latter was murdered seven years later and Aloigi Battista became the new lord of of Cortona. Aloigi Battista was removed from power on the 3rd June 1409 by Ladislaus the Magnanimous, King of Naples, when he conquered Cortona.

In 1411, the castle passed to the Florentine Republic which acquired it from King Ladislaus for 1200 florins, together with Cortona for 60,000 florins. For the next 165 years, the Castle of Pierle followed the fate of the Florence and its lords, the Medici.

In 1576, Grand Duke Francesco I ordered the destruction of the Castello di Pierle to prevent it from becoming a nest of evildoers, “vi si annidassero i malfattori“. Such was the fate of one of the most beautiful and powerful examples of a feudal castle in Tuscany.

More about the Castles of Tuscany.

The small Romanesque church of San Biagio di Pierle, which is located outside the walls of the castle where a small village has developed over time, dates back to the 11 C, but after various alterations it was rebuilt in 1505. It was further restored in the 17 C and 18 C. When Francesco Casali rebuilt the castle in 1371, he did not bother to build a church inside but Millotti states that in ancient times there was a church inside the “first” castle of Pierle dedicated to Pope Leo the Great.

The people of Pierle modernised the parish church (pieve) and memorialised this saint by having his portrait, dressed in the habit of a pontiff, painted on the wall, along with the deacon S. Lorenzo martyr and another deacon saint, as currently can be seen at the back of the church, and placed this inscription on it: “The community of Pierle, in honour of St. Leo I of this place of his devotion”.

Milloti and other Perugian historians believe that Leo I was born in Pierle. To corroborate their thesis, they point out that, until 1848,  in the Calendar of the Diocese of Perugia, Pope Leo I was celebrated on April 19: “April 19 feria quinta S. Leonis Papa I cons et Ecclesiae doctor concivis nostra”. After 1848, the “Concivis nostra” (our fellow citizen) was removed for unknown reasons. In fact, there are many cities that compete for the honour of being the birthplace of the great pontiff, among them being the nearby Anghiari and the famous Volterra. A careful historical analysis, however, seems to have ascertained that the holy Pontiff was born in Rome to a Tuscan family.

The church, which was awarded a Priory, falls within the Tuscany Region in the Municipality of Cortona and was the Diocese of Perugia until the early 1900s, after which it passed to the Diocese of Arezzo-Cortona-Sansepolcro.

The church of San Biagio a Pierle has a gabled roof, a bell tower on the left side and an apse with a pitched stone roof. The facade is provided with an oculus aligned with the door and that illuminates the interior. Above the simple square portal there is a ceramic tile with the image of San Biagio.

The interior of the church consists of a single nave and the presbytery is delimited by a pointed arch. In the apse, there is a fresco depicting Christ tortured at the column. There is no representation of the titular saint, except for a small, recent picture. In the counter-façade there is a beautiful sculpted baptismal font, a memory of the ancient attribution of the church as a parish church. Above it is a fresco with St. John the Baptist baptising Jesus. On the opposite side of the door, there is another 16 C fresco depicting Pope St. Leo I with two saints on either side, one of which is St. Lawrence martyr.

More about the Churches of Tuscany.

Castello di Verrazzano The Castle of Verrazzano retains the designation “castello” (castle) but is in fact a Renaissance villa built around a mediaeval tower. The castle is famous as the seat of the family of Giovanni da Verrazzano, the navigator who discovered New…
Read More »

Brolio Castle Brolio Castle is a nineteenth century Gothic revival structure built on the foundations of an important fort originating in the 10 C. During Medici times, Brolio Castle was greatly modified with the addition of some of the first anti-cannon bastions…
Read More »