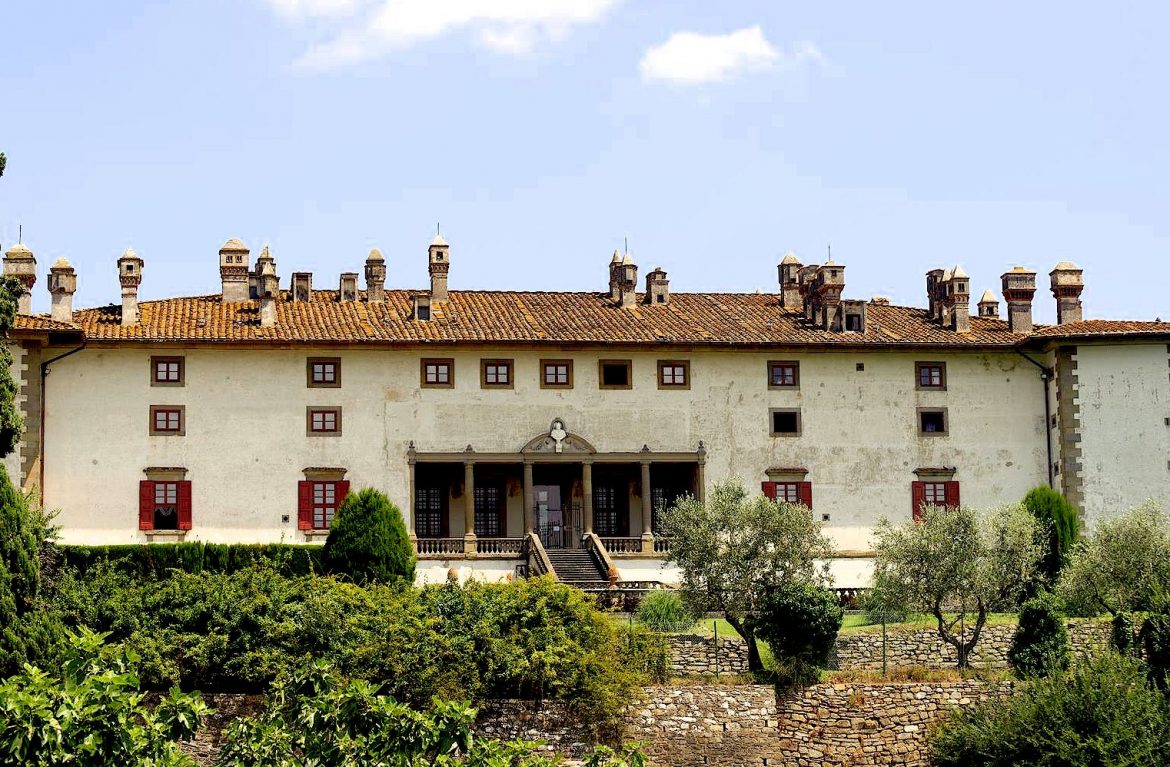 40 Top Sights of Tuscany, Towns in the Province of Prato, Tuscany, Tuscan villas and their gardens, Tuscany travel guide

Villa medicea di Artimino, also known as " La Ferdinanda" and the villa of one hundred chimneys

The Medicean Villa of Artimino, also called “La Ferdinanda” or “the Villa of the hundred chimneys”, is one of the most famous of the Medicean villas of Tuscany, in no small part because of the large number of chimneys on its roof. Villa Artimino is located on a hilltop adjacent to the small medieaval village of Artimino, a dependency of the municipality of Carmignano in the Province of Prato. Villa Artimino is currently available for congresses, anniversaries and special events, and is only rarely open to the public for guided tours but can be viewed and photographed from nearby areas.

Villa Artimino consists of a solid central body with two long symmetrical facades and four bastions protruding at the corners, two high up to the roof (on the western side, towards the countryside) and two on the first floor to create two terraces (on the side towards the town). Buontalenti, the architect, tried to recreate the image of simplicity of the villas of a century earlier, with simple plastered wall surfaces, with a tension between empty and fully decorated walls in the Mannerist style. On the main façade there is a suspended staircase, built in 1930, which reaches a loggia with four golden columns

The villa was built for the Grand Duke Ferdinando I de’ Medici. Filippo Baldinucci relates how the Grand Duke, during one of his frequent hunting trips on Monte Albano, stopped right on this hilltop, in the company of the now elderly architect Bernardo Buontalenti, and, struck by the charm of the place, expressed the desire to to build a villa for himself and his court in that very place. The villa was built in just four years, from 1596 to 1600 and is a masterpiece of the famous architect’s maturity. It represents a stylistic summa of the other Medici villas, completing the regional system of the Medici estates. The elderly Buontalenti, suffering from severe gout, directed the work from his house in Via Maggio in Florence, while his collaborators, Santi Maiani and Gherardo Mechini, worked at the building site. The unmistakable silhouette crowned by the numerous chimneys dominates the surrounding area. Without the intervention of an artificial park, the villa fits directly into an environment that is partly wooded and partly agricultural. Symbolically it was the location for the visual perception of the entire Grand Duchy. For this reason, Ferdinand commissioned the Flemish artist Giusto Utens to paint a series of 17 lunettes illustrating the Medici villas, to be placed in a special space called “the Hall of the Villas”. These lunettes which present vary realistic aerial views of the Medici villas, were dispersed in the 20 C. Today, they are gathered in the Medici villa La Petraia in the Castello area. Although three of the lunettes were lost, they have been replaced by copies. Nearby, in the so-called “Room of the Wars”, Utens created a similar number of lunettes depicting battle scenes- unfortuantely, these have completely disappeared.

The villa was Ferdinand’s favorite for the summer period and on the main floor it was frescoed by Domenico Passignano and Bernardino Poccetti with mythological subjects allusive to the virtues of Ferdinand. The central hall, the grand-ducal apartments, the loggia and the chapel were also decorated in similar fashion. There was also a “wardrobe”, decorated with exceptional paintings such as the Portrait of Pietro Aretino by Titian, now in the Palatine Gallery and Caravaggio’s Bacchus, on display at the Uffizi. For the grand-ducal hunting activities, the great Barco Reale was created, a huge park, encircled by a high wall for about 50 km and which had as its reference point and centre of gravity, the villa of Artimino. In 1782, the villa was sold by the Grand Duke Pietro Leopoldo di Lorena to the Marquis Lorenzo Bartolomei and later passed by inheritance to the Passerini counts (1848)who sold it to the Maraini family in 1911.

Around 1930, some changes were made to the architecture of the villa, including a new staircase and rearrangement of the garden. In the autumn of 1944, the villa was seriously damaged by artillery fire, but the restoration was completed by the spring of 1945. After a number of changes in ownership, in 1979 the Riva family auctioned off and hence unfortunately dispersed the original furnishings and paintings of the villa. Today it houses a conference and hotel centre.

More about villas of Tuscany.

More about the Province of Prato.

More about villa gardens of Tuscany.

Villa di Poggio a Caiano The Medicean Villa of Poggio a Caiano, also known as Villa Ambra, is located in the Province of Prato, in the town of the same name. The villa is a splendid example of the villas built by Lorenzo de' Medici…
Read More »