Tuscany: an introduction to Tuscany, Italy

You are here:
Home » 40 Top Sights of Tuscany » Tuscany 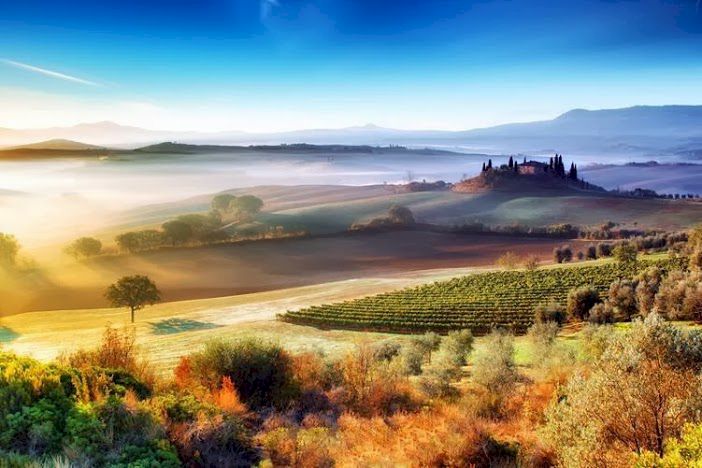 About Tuscany: an introduction to Tuscany, Italy

“Tuscany“ is the name of one of the larger of the 20 Regions of Italy (similar to states in the USA and counties in the UK), and is located in northern peninsular Italy, bordering the Tyrrhenian sea to the west. In Italian, Tuscany is Toscana, and its capital is Florence (Firenze, in Italian). Tuscany is roughly triangular in shape with an area of about 23,000 sq km (8,878 sq mi) and is divided into ten Tuscan provinces. Surrounded and crossed by major mountain chains, and with few but very fertile plains, Tuscany is dominated by hill country so that, not surprisingly, the vast majority of its inhabited nuclei are the Tuscan hilltop towns and villages that are among the most interesting attractions of Tuscany. Its geography can best be understood in terms of the valleys of Tuscany, the majority of which are named after the rivers that formed them. Among the sights of Tuscany are its beautiful landscapes, its Tuscan villas and farm houses, its italianate gardens, its vineyards and olive groves, cypress trees and, above all, its rich artistic legacy and vast influence on European culture. A few cities of Tuscany, foremost among them being Florence and Sienna, were the fount of the Italian Renaissance, and Tuscany was the home of some of the most influential men in the history of art, architecture, science, navigation, political thought and literature. Among them were Petrarch, Dante, Botticelli, Michelangelo, da Vinci, Galileo, Vespucci, Verrazzano, Boccaccio, Machiavelli and Puccini. Like all of the regions of Italy, Tuscany has a unique culinary tradition and is famous for its Tuscan wines. Among the traditional wines are Chianti, Vino Nobile di Montepulciano and Brunello di Montalcino, and over the past thirty years excellent wines, known generically as super Tuscan wines, have been developed outside the traditionally defined Tuscan wine classification.

Map of Tuscany, Italy Here's an interactive map of Tuscany with links to the best websites for many of the most interesting cities, towns, villages and sights of Tuscany.…
Read More »

Learn Italian in Tuscany or via Skype Lorella Federico offers Italian lessons at all levels for individuals and small groups visiting Chianti. Lorella, who is a professionally trained Italian language teacher, lives in Panzano in Chianti. You can attend lessons at her location or, if you are…
Read More »