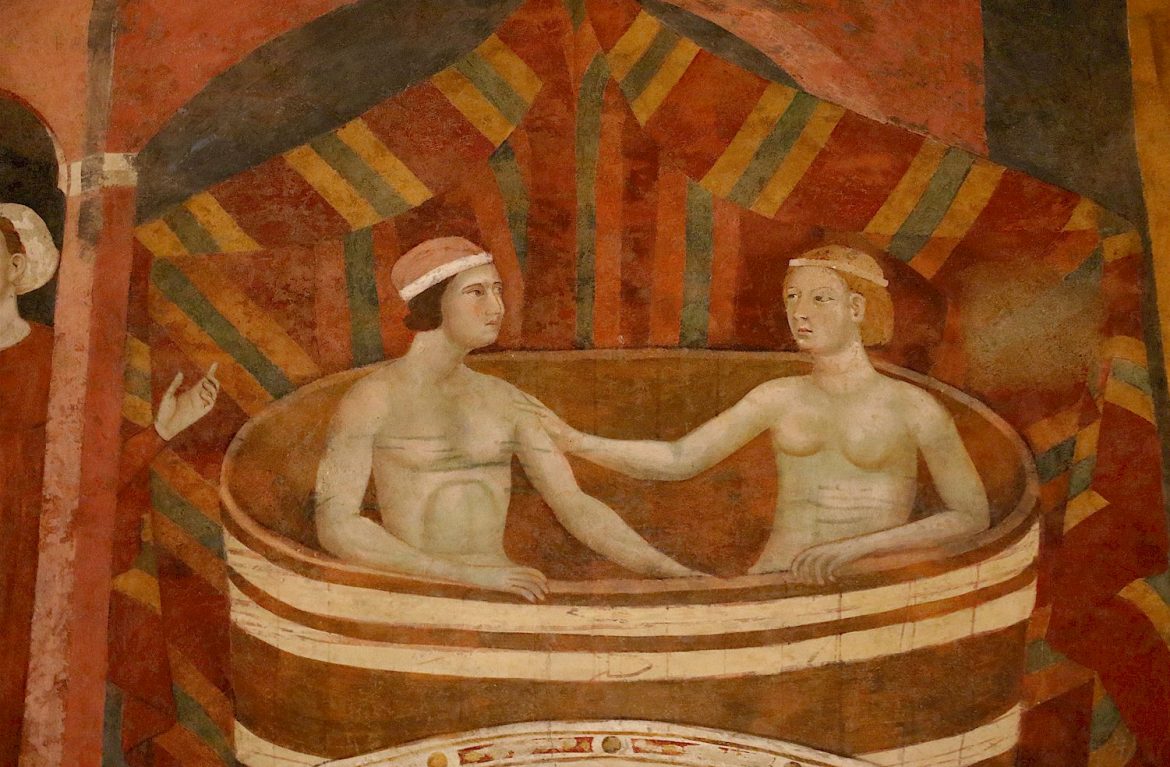 Activities for visitors to Tuscany, History and Culture of Tuscany, Museums in Tuscany, Tuscany travel guide

The Palazzo Comunale (town hall) of San Gimignano, also known as the Palazzo del Popolo or the Palazzo nuovo del Podestà, contains within it, among many treasures, the Camera del Podestà (Chamber of the Podestà) which is frescoed with the positive and negative outcomes of the amorous initiation of a young man, a curious and fascinating work by Memmo di Filippuccio dating back to the early 14 C.

n the left side of the room, there is the immoral couple that could never get together because the young groom was lured by two deceitful women who steal his goods, beat him, and leave him aching. In this case, love is dangerous. Nearby, there is another tragic love: “Paolo e Francesca,” the famous lovers from Divina Commedia by Dante Alighieri—their faces rubbed out in a sort of “damnatio memoriae.”

On the right wall, there are scenes of marital love. The bride and groom are meeting their relatives surrounded by symbols of loyalty. The real masterpieces are the last two scenes: the young couple, now married, enjoy the intimacy of a warm bath. Finally, the nuptial bed embraces the couple, giving love the opportunity to fulfill one of its highest tasks: create life.

The singular style of the painter, identified by Roberto Longhi as the Siennese Memmo di Filippuccio, had fascinated scholars since the discovery of the frescoes. Memmo, probably trained in the pictorial site of the upper basilica of Assisi, where Giotto was also active, between 1303 and 1317, held the role of civic painter in San Gimignano. In fact, he was commissioned to decorate the banners and the boxes for the elections, but also to create frescoes for the various sacred and civil buildings of the city. Thus was inaugurated that sort of family monopoly which, subsequently, saw the sons of Memmo, Lippo and Tederigo as protagonists of the San Gimignano art scene: they were responsible for the “New Testament Cycle” in the Collegiate Church of Santa Maria Assunta, traditionally attributed to the hypothetical painter Barna da Siena, and the great “Majesty” of the Council room of the Palazzo Comunale, based on the Siennese model perhaps also thanks to the influence of Memmo’s son-in-law, the famous Simone Martini.

More about the art and architecture of San Gimignano.

Museo Horne, Florence The Horne Museum (Museo Horne) is located in Florence at Via dei Benci, 6, a short distance away from the Arno and the Ponte alle Grazie, within an easy walk of the major sights around the Palazzo Vecchio. A visit…
Read More »

Minibus tours in Tuscany with Giovanni Sirabella Giovanni is an English-speaking driver-guide who leads tours by minibus and car all over Tuscany, including wine tours and specialising in shore excursions from the cruise ship port of Livorno, and in tours of the Cinque Terre and Portofino.…
Read More »

Films shot in Tuscany Tuscany had already begun to appear in films at the beginning of the 1900s. Among the better known movies featuring or filmed in Tuscany are: Romola (Henry King, 1924), a silent movie based on the novel by George Elliot and…
Read More »