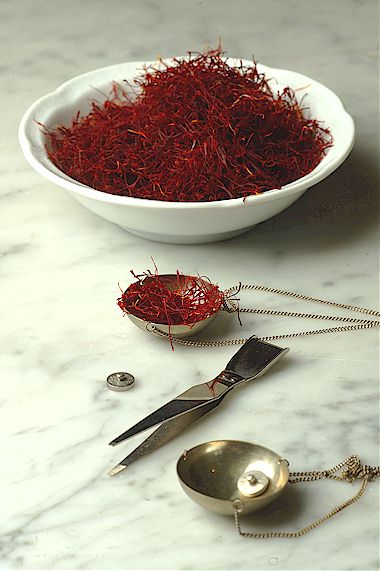 Saffron is grown in small quantities but high quality in Italy where it is used in a number of regional dishes, most famously Risotto alla Milanese. The prized “Aquila” saffron (zafferano dell’Aquila) is characterised by elevated safranal and crocin content, shape, unusually pungent aroma and intense colour. It is grown exclusively on eight hectares in the Navelli Valley in the Abruzzo region, near L’Aquila. This strain was first introduced into Italy by a Dominican monk from late 15 C Spain. However, the most important saffron cultivation, for quality and quantity, is in San Gavino Monreale, Sardinia, where saffron cultivation covers about 40 hectares (60% of Italian production). It also has very high crocin, picrocrocin and safranal content.

The English word saffron is derived from the 12 C Old French word safran, which in turn comes from the Latin safranum. Safranum is also the origin of the Italian word zafferano and the Spanish azafrán. Safranum originates from the Arabic word asfar (أَصْفَر‎), which means “yellow,” via the Persian paronymous za´farān (زَعْفَرَان‎).

The domesticated saffron crocus (Crocus sativus) is an autumn-flowering perennial plant unknown in the wild, derived from the eastern Mediterranean C. cartwrightianus, which originated in Crete and not, as was once generally believed, in Central Asia. C. cartwrightianus was subjected to extensive artificial selection for elongated stigmas.

The saffron crocus does not produce viable seeds and propagation is thus entirely artificial. The corms, which survive only a single season, are broken apart at the end of the season and replanted. The long, narrow crocus leaves appear above ground in late summer and the purple buds appear in autumn. The brilliantly hued flowers bloom in October and range in colour from a light pastel shade of lilac to a darker and more striated mauve. Each flower yields three crimson pistils (the stigmas are the part of the pistil that is harvested), which provide the red saffron. The harvest takes place over several weeks in October and November. The fragile harvested pistils are dried overnight at a temperature of 45 C, losing 80% of their weight. It takes about 125,000 flowers to produce one kilogram of saffron. A tenth of a gram is usually packed in a small sachet which sells for about €3.50, making saffron worth €35,000 per kg (gold sells for about €22,000 per kg).

In the Middle Ages saffron was, not surprisingly, known as “red gold” and the fields of saffron crocuses stretched to the horizon around San Gimignano and elsewhere in Tuscany. It was money from saffron that helped build the famous towers of San Gimignano. But in the 17 C, when cheaper, though inferior, saffron could be imported from France, cultivation in Italy all but died out. The revival of artisanal saffron cultivation in Tuscany and elsewhere in Italy is thus a welcome development inspired in part by the slow food movement in Tuscany.

One reason to buy your saffron in Tuscany is because in other places saffron adulteration is commonplace. Typical methods include mixing in extraneous substances like ground up dried red beet, pomegranate fibres, red-dyed silk fibres, and, most commonly, the saffron crocus’s tasteless and odourless yellow stamens. The latter are openly sold as “saffron” in Egypt but are totally worthless in cookery. Other methods of adulteration include coating genuine saffron with viscid substances such as honey or vegetable oil to increase its weight. Powdered saffron is much more commonly counterfeited, with turmeric, paprika and other powders used as diluting fillers or substitutes. Adulteration can also consist of selling mislabeled mixes of different saffron grades. In India, for example, high-grade Kashmiri saffron is often sold mixed with cheaper Iranian imports. These mixes are then marketed as pure Kashmiri saffron. In my personal experience, saffron bought in Kashmir has a more stable structure so that the fibre does not disappear when rubbed between the fingers in water. In contrast, Spanish saffron bought in Europe dissolves entirely. Italian saffron tends to be stable so that fibres remain visible even after (brief) cooking.

In 2005, Italian saffron received an official label of recognition for its purity, strong taste and colouring properties, and the saffron of San Gimignano, for example, has a DOP designation which means that it is a protected and guaranteed mark. Buying from the producer you not only obtain a very good price but are guaranteed 100% pure saffron. More about saffron cultivation in Tuscany.

Tuscan Wineries All of these Tuscan wineries in the Chianti Classico wine territory of Tuscany have their own wines and usually also their own olive oil on sale. You may ask to taste a wine before buying and at the larger wineries…
Read More »