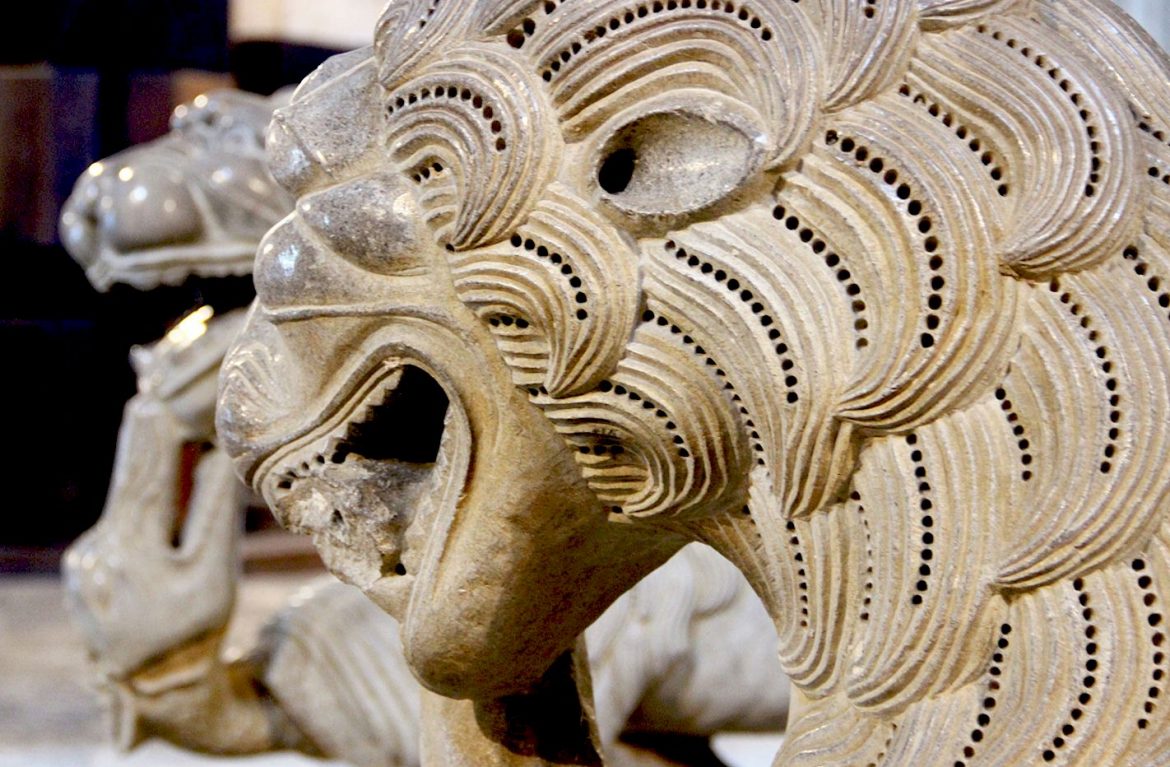 The Parish Church of St. George at Bràncoli, in Lucca Province, Tuscany.

The ancient Pieve at Brancoli is one of the most atmospheric mediaeval structures in a Region, Tuscany, that contains a great many of them, and is well worth a visit if you are exploring the environs of Lucca. The Brancoleria, where the church is situated, stretches between the valley and the slopes of Mount Pizzorne, upstream on the Serchio river, approximately 10 km from Lucca.

The earliest church on the site was was built on the ruins of a pagan temple dedicated to the god Apollo in the early Middle Ages. The first known documentation of the church is a manuscript dating from 767, preserved in the Archbishops’ Archives in Lucca. In the manuscript, one Ausolo di Brancoli bequeaths all his assets to the church or monastery of San Giorgio in Generiano. Another document mentions the church as dependent on the parish of Sesto from the year 772. and the first mention of the church as an independent parish dates back to 1092.

It was in the second half of the 11 C that the entire area of ​​the Brancoleria experienced a dramatic growth in population.  The activity of Bishop Anselmo da Baggio, who later became Pope Alexander II, and the financial support of Matilde di Canossa led to the construction of the church as it is today. Construction coincided with the massive expansion in the number of parish churches that occurred during the late 11 C and early 12 C, resulting in a number of Romanesque architectural masterpieces, of which the Pieve di San Giorgio is one. Both the exteriors and the carvings inside this masterpiece of Romanesque art survive intact, providing a typical example of high mediaeval austerity. The crenelated bell tower is also pure Romanesque, pierced with single and double lancet windows. The entire edifice is composed of square marble blocks. The massive bell tower is in the style of Lucca and partially covers the facade.

Inside, the church has three basilican naves articulated on five bays, the transept is absent and the presbytery is slightly raised and still divided by a partition, a fence that in the Middle Ages divided the priests from the faithful. A semicircular apse ends the church. The columns and pillars are surmounted by capitals with phytomorphic decorations of a classical imprint and support round arches. The roof is made of wooden trusses in all three naves. Small single-lancet windows illuminate the church at the level of the side walls and in the cleristory, above the arches.

The 12 C octagonal baptismal font, in the left aisle, is signed “Guidi”, a Lombard-Lucca master, and is decorated with plant motifs and heads. The presence of a carved fruit at each edge is unique. The most important sculptural piece is however the Ambo, dated 1194 and the work of the master Guidetto. It has a quadrangular plan, with Corinthian columns that support it, two of which rest on as sculpted lions.

In addition, there are two sculptures dating back to the 11 C: the altar with six columns and a human figure in the centre and the holy water stoup with plant decorations and zoomorphic protomes. The latter bore the signature of the sculptor, “Raitus”, and was unfortunately stolen in June 2000.

On the right wall, there is a 15 C glazed terracotta work attributed to Andrea della Robbia depicting St. George, the dragon and the princess.

Above the altar, there is a painted cross of the Lucca school of the 13 C and a fresco of an Annunciation dating from the end of the 14 C by Giuliano di Simone is located at the end of the left aisle.

The tabernacle at the head of the right aisle, in stone, is Renaissance. The sacristy preserves a processional cross from the 16 C.

More about the Basilicas, Pievi, Abbeys, Monasteries and Hermitages of Tuscany.