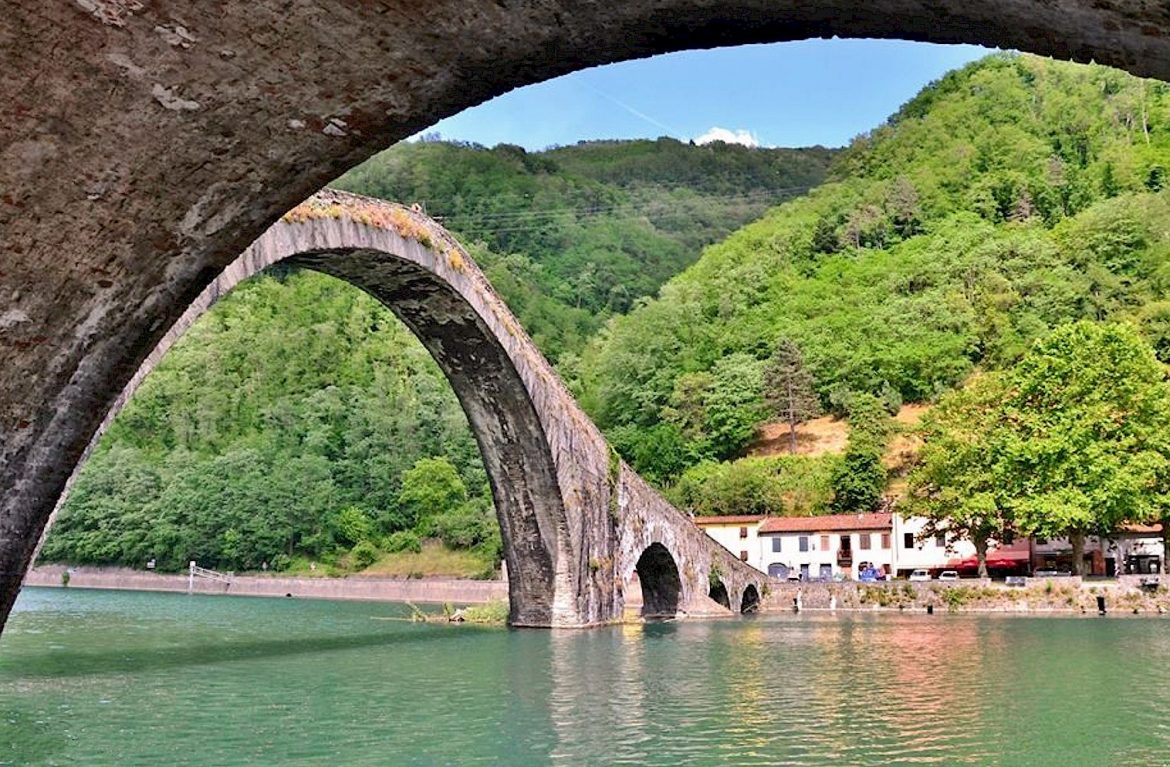 Ponte della Maddalena (Ponte del Diavolo), near Borgo a Mozzano in the Province of Lucca

The beautiful and intriguing Ponte della Maddalena is a bridge crossing the Serchio river near the town of Borgo a Mozzano in the province of Lucca, located some 24 km north of Lucca and 5 km from Bagni di Lucca. The interesting Ponte Colandi at Fabbriche di Vallico is also nearby and can be included in a tour of the Serchio river valley. Ponte della Maddalena is one of numerous mediaeval bridges known as “Ponte del Diavolo“, the “Bridge of the Devil”, on the basis that creating the high and narrow main arch needed supernatural assistance. According to legend, the bridge was built by Saint Julian who, unable to complete this difficult project, requested assistance from the Devil, offering him in return the soul of the first living being to cross the finished bridge. Once the bridge was completed, Saint Julian threw a piece of bread onto the bridge, luring a dog to cross it, thus cheating the Devil.

The Ponte della Maddalena was a vital river crossing on the Via Francigena, the most important early mediaeval pilgrimage route to Rome for those coming from France and beyond. The Via Francigena actually begins at Canterbury in England.

The bridge is a remarkable example of medieval engineering. The largest span is 37.8 m. The bridge is also described in a 14 C novella by Giovanni Sercambi of Lucca.

In 1670, the General Council of the Republic of Lucca issued a decree prohibiting passage over the bridge with millstones and sacks of flour in order to preserve the structure. Its singular design, with one large arch flanked by three smaller ones, has inspired the works of many artists. The bridge’s slimming profile, which continues to strike its admirers, must have been even more impressive in the past before a dam was built, in the years after the Second World War, which raised the level of the water in the surrounding area.

There is little historical information about the building of the bridge. Nicolau Tegrimi, in the biography of Castruccio Castracani, attributes the bridge to Matilde di Canossa (1046-1125) and mentions a restoration made by Castruccio Castracani (1281-1328.) According to the hypothesis of Massimo Betti, during the Castruccio government the minor arches were constructed in stone, replacing previous structure in wood. This would explain the difference between the major arch and the minor ones.

In the 16 C, the bridge acquired the name of Ponte della Maddalena, after an oratory dedicated to Mary Magdalene, whose statue stood at the foot of the bridge on the eastern bank. In the following centuries the right bank was built up with factories. In 1889 the structure of the bridge, on the Borgo a Mozzano side, was modified to allow the passage of the railway line that runs from Lucca to Aulla.

In 1836, after being badly damaged during a flood, the bridge underwent urgent repair work.