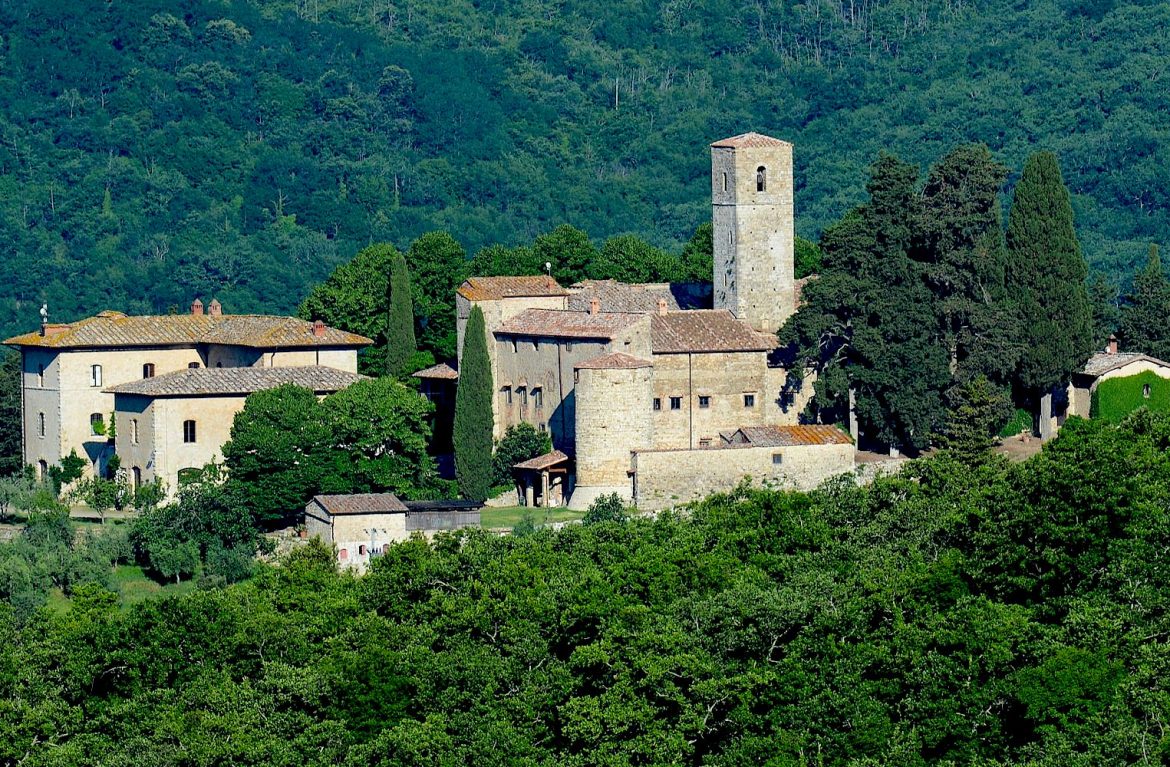 Abbeys and Churches of Tuscany, History and Culture of Tuscany, Sights of Chianti, Tuscany travel guide

One of the most photogenic and interesting mediaeval parish churches in an area rich with romanesque parish churches is the Pieve (parish church) of San Polo in Rosso which dates back to the 12 C. The name of the church is mentioned in a donation of 1070 preserved at Badia di Coltibuono where it is referred to as Sancti Pauli Scito Russo and also in a bull dated 11 March 1103 issued by Pasquale II to the bishop Giovanni da Fiesole, in which the Pope confirms that the pieve belongs to the bishop.

The parish church of San Polo in Rosso was a possession of the Firidolfi da Montegrossi, who probably owed the Romanesque-Gothic structures and it belonged to the descendants of Diotisalvi, son of Drudolo of the Ricasoli family. By 1200, the structure functioned as a fortress, due to its position on the Florentine Chianti defensive line and became a fortified settlement, as so often in this part of Tuscany, with the addition of a quadrangular wall, interspersed with towers. The facade of the church also had upwardly extended walls and the apse was used as a defensive tower.

In 1351, the pieve fortress was subjected to a siege by the Ricasoli, who wanted to rob the parish priest Raniero Ricasoli, their uncle, but they were driven away by the troops of the Florentine Republic. In 1478, it was partially destroyed by the Aragonese, and in 1480 the pieve had as parish priest the Florentine, Ludovico, son of Ugolino Martelli.

On 25 July 1497, with the brief of Alexander VI to the Signoria of Florence, the parish church of San Polo in Rosso returned to the possession of Giuliano di Ranieri Ricasoli.

The fortified church has a Romanesque-Gothic character, and consists of the large church itself with three naves, incorporated into a large, almost quadrangular, castle, so much so that the left aisle is raised and crowned by battlements, now filled in but the traces of which remain evident. The fortress also included the rectory and the courtyard with the cisterns. The bell tower served the fortress as a watchtower, allowing control of the area to the south. This intervention has altered the internal aspect of the church, which originally had typically Romanesque characteristics. There are two circular towers from the 15 C and two quadrangular ones from the end of the 13 C. The facade has an “eye” opening.

The interior has three naves divided by pillars, a semicircular apse and ogival cross vaults of the 14 C. These replaced the wooden trusses which collapsed in the siege of 1351. In the main nave, there is a cycle of frescoes in the manner of Ambrogio Lorenzetti, dated between the fourth and fifth decade of the 14 C, while the decorations of the ribs and vaults date to the restoration of the early 20 C. The result of 20 C restorations is the lively but fake two-colour decoration and the starry background of the segments of the vaults, which frame a cycle of late 13 C frescoes. Of note, in the presbytery, is a valuable wooden “Crucifix” from the Siennese school from the early 14 C.

More about the Pieve di San Polo in Rosso.

Sant’Emiliano a Borgonuovo near Cortona The parish church (pieve) of San Mamiliano a Cignano, now known as the church of Sant'Emiliano in Borgonuovo, is located on the Arretine hillside of the Val di Chiana, a short distance from the famous Abbey of Farneta, and was…
Read More »