San Donato in Poggio - what to see and where to stay

You are here:
Home » Chianti, Italy » San Donato in Poggio 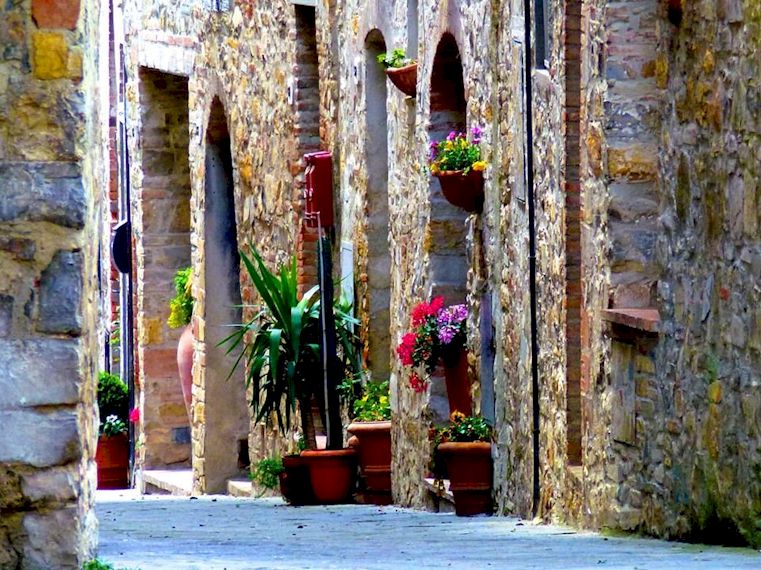 The Chianti village of San Donato in Poggio, Tuscany

San Donato in Poggio is a mediaeval village of great charm located near the Via Cassia, the highway that runs along the western boundary of the Chianti Classico wine zone from Florence to Sienna. In modern times, the Via Cassia has been superceded by the Florence-Sienna motorway but in fact a drive along the Via Cassia is second in interest only to the Via Chiantigiana which runs right down the middle of Chianti.

In any case, those making a motor excursion through this part of Chianti should be sure to stop for an hour or so in San Donato. Quite a stretch of the 12 C defensive wall remains intact along with two mediaeval gateways, the Porta Fiorentina and Porta Senese. There’s also a fine watch tower, Il Torrino, springing up from the wall.

The main street, Via del Giglio, runs from Porta Fiorentina to the main piazza, location of Palazzo Malaspina and the church of Santa Maria della Neve, that rare structure in Tuscany, a Gothic church, dating from the 15 C. In the middle of the piazza, there is octagonal well that was the main source of water for San Donato through most of its history. The Palazzo Pretorio, largely reconstructed following World War II bomb damage, faces Palazzo Malaspina.

The most important church in San Donato is the Pieve di San Donato located near the Porta Senese. This parish church is Romanesque in style, like almost all Chianti parish churches (pievi), and is documented as early as the year 989. It houses a Della Robbia baptismal font dating from 1513.

There are two restaurants and a number of food supply shops in San Donato.

Worth a stop. More about San Donato in Poggio and its remarkable history.

Greve in Chianti Greve in Chianti is a small town situated in the valley of the Greve stream, half-way along the scenic Chiantigiana highway (SS 222) that runs from Florence to Sienna. Greve has an attractive, arcaded, triangular piazza with several ceramics and…
Read More »

Map of Tuscany, Italy Here's an interactive map of Tuscany with links to the best websites for many of the most interesting cities, towns, villages and sights of Tuscany.…
Read More »

Lamole Lamole is a small village high up in the Chianti hills, accessed from a turnoff between Greve and Panzano. While Lamole is a charming little place in itself, the main reason for a visit is the beautiful drive up, passing…
Read More »