You are here:
Home » Tuscan villages and towns » Towns in the Province of Sienna, Tuscany » Chianciano Terme 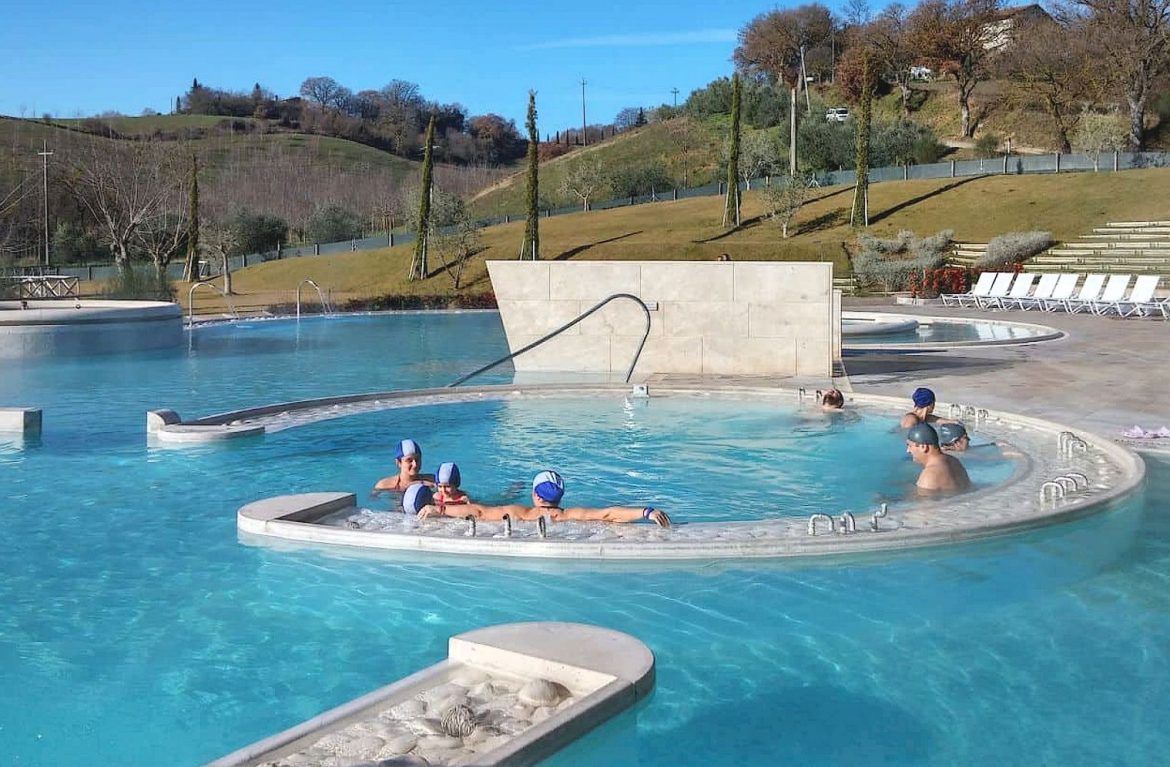 The thermal baths of Chianciano Terme in the Valdichiana senese, Tuscany

Traces of Chianciano Terme date back to the 5th century BC, when the Etruscans built a temple dedicated to the god of Good Health, close to the Silene springs where the newer quarter of Chianciano (the Terme section) stands today. The curative power of the thermal springs at Chianciano became well known during Roman times. Horace visited the area on the advice of his physician during the 1st century BC. Luxurious Roman villas were built in the area near the thermal baths.

There is little archaeological evidence of much activity during the Middle Ages, but, by the 12 C and 13 C, Chianciano belonged to the Manenti Counts, Lords of Sarteano. The location of Chianciano close to the Via Francigena (the mediaeval main connection from Rome to France and so to Canterbury in England) fostered its development, and Chianciano reached a degree of judicial autonomy by 1287 when it established its own statutes.

In the 14 C, the city states of Orvieto and Sienna contended for control of Chianciano, with Sienna being the ultimate victor.

During the first decades of the 20 C saw the area around the springs (the Terme section) draw the attention of developers. Between 1920 and 1930 neoclassical establishments with Pompeian-style bowers were built, then destroyed in 1940 when the Fascist-controlled state took possession. While under state control, a new town plan was designed by architects Loreti and Marchi, who also designed some spas in the Acqua Santa Park. The town plan was adjusted by the Town Technical Office of Chianciano in 1958 and passed in 1961.

Present day Chianciano Terme has two distinct areas. Chianciano Vecchia (Ancient Chianciano) is located atop a small hill. The Porta Rivellini, with its elegant Renaissance structure, is the main gateway into the town at the end of the Via Dante. In contrast to this is the modern quarter, the Terme, the nucleus of which has grown around the thermal springs and stretches northward in a crescent shape along the Vale della Libertà towards the older city.

The Church of the Immacolata, restored in 1588 after the Florentine conquest of Sienna, once housed the Annunciation by Niccolò Betti, the Holy Family by Galgano Perpignani, and a fresco of the Madonna of the Peace attributed to Luca Signorelli. These works are currently all in the museum of the Collegiata Church of San Giovanni Battista, a Romanesque-Gothic building with a notable portal. It houses a Holy Scene fresco (16 C), a 14 C crucifix, and a wood-carved Dead Christ by Giuseppe Paleari (1783). The Church of Madonna della Rosa takes its name (“Madonna of the Rose”) from a fresco portraying the Virgin giving a Rose to the Child, the work of a 15 C Siennese master. Also from a Siennese artist is the Madonna delle Carceri (14 C).

Today, the Terme part of Chianciano Terme is considered among the finest health resorts in Italy with its parks, numerous hotels and especially its therapeutic waters that are reputed to cleanse the liver via an increase in the production and excretion of liver bile. Among the more notable spas are Acqua Santa, Acqua Fucoli, Acqua Sillene, Acqua Santissima (which also advertises itself as a spa for those with respiratory problems), and Acqua Sant’Elena (which advertises that the calcic-alkaline bicarbonate in its water can treat kidney and urinary tract problems).

The Chianciano Museum of Art is also an interesting attraction, with a large collection of contemporary and ancient art, including many pieces of historical interest.