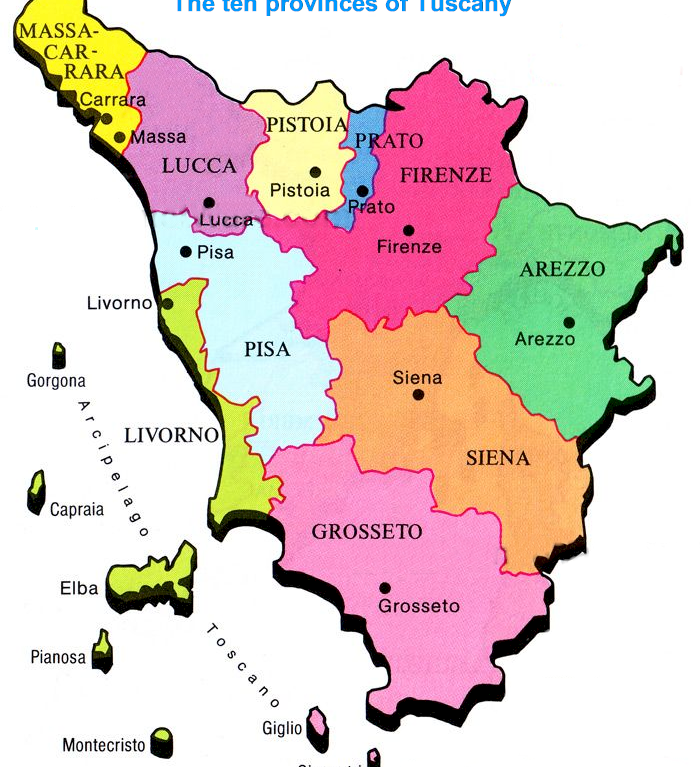 Map showing the provinces of Tuscany

The Italian Region of Tuscany is divided into ten provinces which exhibit considerable diversity in terms of size, geomorphology, landscape and towns. Some Tuscan provinces are on the coast while others are inland, some have large flat areas while most are very hilly. This diversity makes Tuscany an endlessly interesting place to visit at any time of the year.

The Provinces are named after their main town or, in the case of Massa Carrara, two main towns:

The Province of Florence is probably the most popular destination in Tuscany for both Italians and tourists from other countries, due to its incredible artistic heritage and the attractiveness of its contada – countryside – which includes half of the Chianti Classico wine zone, the Mugello and the upper Arno valley.

The Province of Sienna, with the city of Sienna itself, Siennese Chianti, the Val d`Orcia and the many villages and towns that dot this part of Tuscany is second only to the Province of Florence in  interest.

The Province of Arezzo is located in the eastern part of Tuscany. The town of Arezzo is famous for its goldsmiths and in the north of the province there is the hilly region of Casentino, home to Poppi Castle among many other sights.

The Province of Prato is quite small and has long been an important centre of the textile industry which in recent times has attracted a very large number of Chinese. The city of Prato is home to 50,000 Chinese – about a quarter of the population.

The Province of Pistoia is another relatively small province which is somewhat neglected by tourists despite its artistic treasures. In winter, the Abetone attracts many Tuscan skiers, whereas Montecatini Terme and Monsummano Terme are two famous spa towns.

Going to the west, there is the province of Lucca, spreading between Florence and the sea. With its diverse landscape, in summer it is one of the favourite destinations of sea lovers, whereas the Garfagnana attracts many hikers.

The Province of Massa-Carrara is famous for the marble quarries that dot the Apaun Alps. Michelangelo travelled personally to this part of the region to choose the pieces of marble for his masterpieces.

The Province of Pisa is much more than Pisa, the famous art city after which the province is named. The city of Volterra, originally founded by the Etruscans, is one of many charming sights in this province.

The Province of Livorno consists of a narrow strip of land spreading from north to south along the coast. The Elba Isle, a popular summer destination, is part of this province.

The Province of Grosseto is the southermost of the ten Tuscan provinces and is unjustly neglected by tourists. Grosseto is the main city of the Maremma, an area of great interest for its beaches and for the Nature reserves there. Monte Argentario, the Uccellina national park and Monte Amiata are other attractions of this diverse province.

The Maremma of Tuscany, Italy The Maremma is a geographical area covering part of western Tuscany, notably the Province of Grosseto, and a small part of northern Latium (Lazio). It can be divided into the Alta Maremma (upper or northern Maremma) which borders on the Provinces of Sienna and Pisa,…
Read More »

Films shot in Tuscany Tuscany had already begun to appear in films at the beginning of the 1900s. Among the better known movies featuring or filmed in Tuscany are: Romola (Henry King, 1924), a silent movie based on the novel by George Elliot and…
Read More »

Transport in Tuscany The main Tuscan cities such as Florence, Pisa, Lucca and Sienna plus many of the smaller towns are connected by the railway network, but a great many towns and villages are served only by buses or by no public transport…
Read More »

Minibus tours in Tuscany with Giovanni Sirabella Giovanni is an English-speaking driver-guide who leads tours by minibus and car all over Tuscany, including wine tours and specialising in shore excursions from the cruise ship port of Livorno, and in tours of the Cinque Terre and Portofino.…
Read More »