You are here:
Home » Castles of Tuscany » Brolio Castle 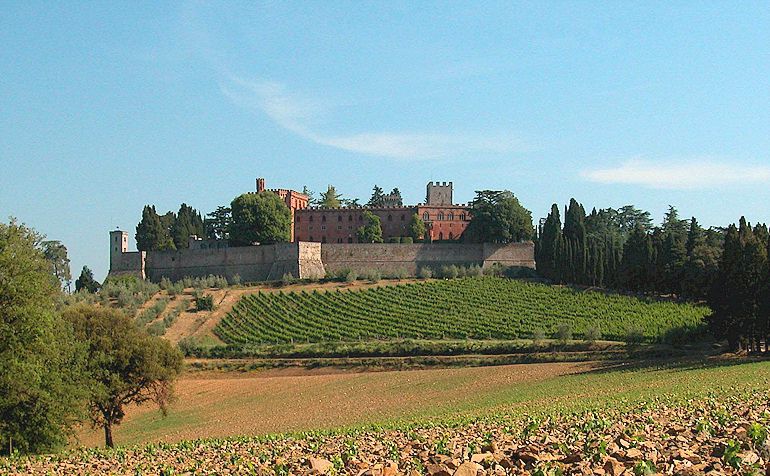 Castles of Tuscany, Chianti, Italy, Sights of Tuscany, Tuscan villas and their gardens, • • • VIEW ALL POSTS • • •

Brolio Castle is a nineteenth century Gothic revival structure built on the foundations of an important fort originating in the 10 C. During Medici times, Brolio Castle was greatly modified with the addition of some of the first anti-cannon bastions constructed in Italy. Also during the 19 C, a forested park in the English style plus a neo-Renaissance italianate garden were created. The walls, gardens and the chapel are open to the public, and there are magnificent views as far as Siena from the bastions. Brolio Castle is a well-known wine producer.

Brolio’s greatest claim to fame is that it was the home of Baron Bettino Ricasoli, the Iron Baron, a descendant of the family that has owned Brolio since 1144, and an important politician of the Risorgimento. He is perhaps best know nowadays as the formulator of the grape blend that defined Chianti wine for more than 150 years.

Worth a brief visit. More about Brolio Castle.

Castello di Verrazzano The Castle of Verrazzano retains the designation “castello” (castle) but is in fact a Renaissance villa built around a mediaeval tower. The castle is famous as the seat of the family of Giovanni da Verrazzano, the navigator who discovered New…
Read More »

Uzzano Uzzano Castle is a fine Renaissance villa located on the outskirts of Greve in Chianti. Traces of the ancient castle may be discerned in the remains of a watch tower but the predominant form of the structure is now a…
Read More »

Monteriggioni Monteriggioni is one of the most famous and attractive castles in all Tuscany. Its curtain wall and fourteen towers are virtually intact, and the interior is now occupied by a small and peaceful village. …
Read More »

Greve in Chianti Greve in Chianti is a small town situated in the valley of the Greve stream, half-way along the scenic Chiantigiana highway (SS 222) that runs from Florence to Sienna. Greve has an attractive, arcaded, triangular piazza with several ceramics and…
Read More »