The splendid baroque Biblioteca Capitolare (Chapter Library) of Pescia in the Province of Pistoia.

You are here:
Home » History and Culture of Tuscany » Biblioteca Capitolare (Chapter Library) of Pescia 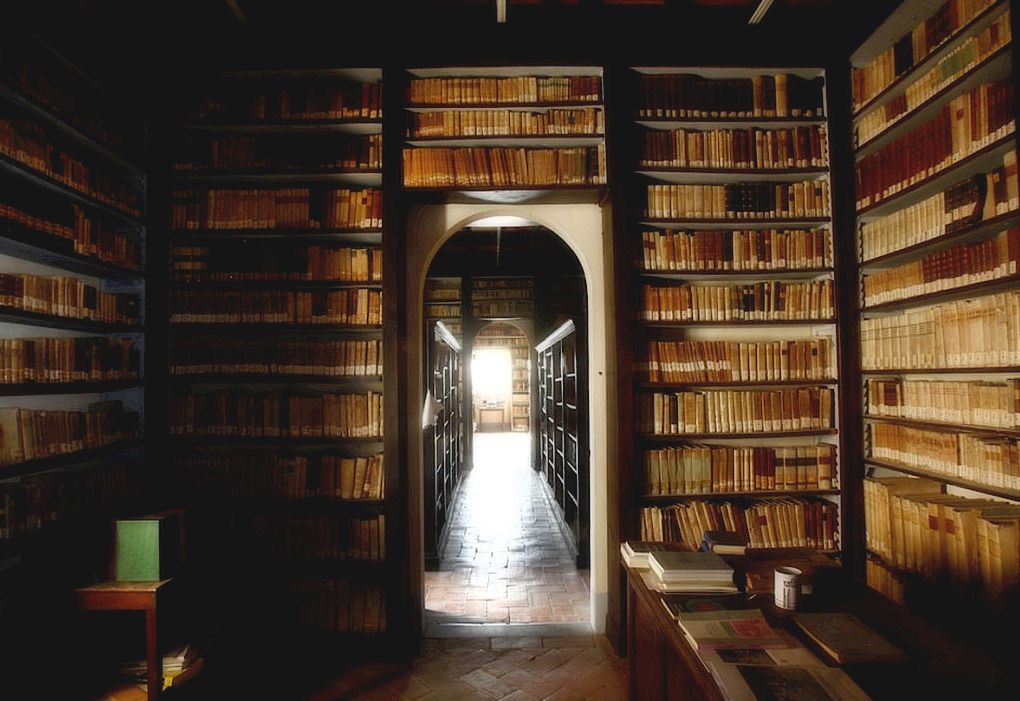 History and Culture of Tuscany, Towns in the Province of Firenze, Tuscany, • • • VIEW ALL POSTS • • •

One of the finest sights in the Province of Pistoia outside of Pistoia itself is a baroque library, the Biblioteca Capitolare di Pescia, located in the little town of Pescia.

The Biblioteca Capitolare di Pescia was designated a canonical library in July 1666 by Pope Alexander VII (Chigi) and traces its origins to the bequest of the Canon Romualdo Cecchi, a famous treasurer of the Prepositura nullius of Santa Maria at the pieve (parish church) of Santa Maria. After being active in the ranks of the papal courts, Cecchi bequeathed to the future Cathedral of Pescia all his books under the condition that a “publicae concivium utilitati” library – a useful public library – would be established. He had also arranged a legacy providing 25 scudi annually, intended to cover the costs of administration and additional purchases, while the canon librarian was assured a salary of about five crowns a year. The main readers of the Cecchi legacy were the canons of the prelature. Over the next two hundred years, the collection of books was greatly enriched, resulting in a library of some 10,000 volumes. Among the rare books are 42 incunabula, 100 manuscripts from the 13 C to the 19 C, and 580 16 C volumes. There is also an important collection of prints that preserves a valuable 17 C collection from Rome. This is a very rare compilation that consists of 36 folio volumes bequeathed in 1696 by Msgr. Andrea Buonvicini, rector of the College of Propaganda Fide in Rome. The uniqueness of this collection lies precisely in Buonvicini’s choice of iconographical themes. These are listed on the spines of the individual volumes.

In the manuscript section, the Biblioteca Capitolare di Pescia preserves several important codices including a rare book by Leonardo Bruni on the lives of Dante and Petrarch, a rare description of Florence by Donato Accolti, a Roman missal of the 15 C named the “della Maddalena” because it was donated by the brothers of the Maddellena to the canons of the cathedral to protect it from being suppressed by the Grand Duke of Tuscany. Among the corpus of incunabulae, there is a very rare edition of the Golden Legend by Jacopo da Voragine published in Venice in 1483 by Ottavio Scotus, The volume Super titulis De verborum obligationibus et de duobus reis constituendis by Franciscus De Accoltis, published by the brothers Bastiano and Raffello Orlandi of Pescia in 1486.

In the second half of the 18 C, the now well-provided library was further enriched by the donation of the library of the Giureconsulto Gaetano Forti, referendario of the Roman See. With the arrival of this extensive collection, conditions called for the library holdings to be put in proper order, and Angelo Maria Bandini from Fiesole, the well-known librarian of the Marucelliana, was appointed to carry out this task . He set about re-organising the thematic divisions and prepared the first catalogue. At the end of the 19 C, the library was enriched again by a legacy from Senator Leopoldo Galeotti who left instructions in his will that his books be donated to the Chapter Library in memory of his early studies there. This valuable Risorgimento collection was not incorporated into catalogued library and still constitutes separate foundation, designated the “Fondo Galeotti“.

The main hall of the library was built around 1688 and, in April 1711, the canons of Pescia invited the painter Pietro Paolo Scorsini to come from Lucca to paint the ceiling of the new structure. The theme of the frescoed ceiling is that of Wisdom, in the centre, in fact, is painted Hermes Trismegistus with the caduceus that recalls the humanities; Wisdom, therefore, as it indicates the underlying scroll bearing the Latin inscription “aedificavit sibi Domum”, he built his own house.

The execution of the huge baroque painting is characterised by a striking perspective background, including the cartouches, festoons and vases. It cost about 90 scudi. The cabinets and shelves that dominate the monumental hall were made in the late 17 C, while the bench for immediate consultation dates from the early 18 C. Among the interesting memorabilia that adorn the library, there are two beautiful globes of the17 C that tradition says belonged to Cecchi, the founder of the Chapter whose portrait hangs on the back wall; two golden candlesticks of the 18 C that once graced the Duomo.

The cartouche on the main door to the monumental hall displays an excerpt from the Alexandrian Bull of July 1666: “Extrahentes Libros Excommunicantur” – drawing the attention of visitors to the fact that anyone who steals a book from the Chapter Library of Pescia will be excommunicated forthwith, a regulation that could usefully be applied more widely.

More about the historical libraries of Florence.