You are here:
Home » Tuscany travel guide » The Parish Church of San Giovanni Evangelista at Monterappoli 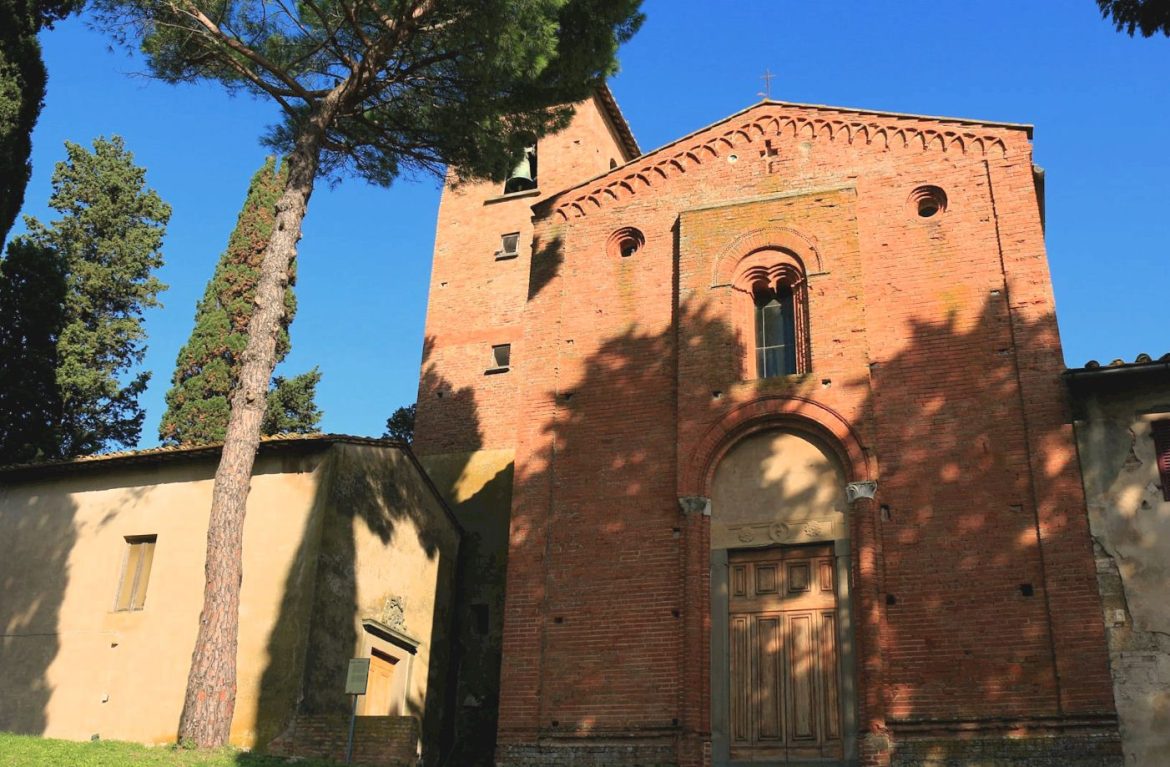 The Parish Church of San Giovanni Evangelista at Monterappoli

Parish church of St. John the Evangelist at Monterappoli

The Parish church of St. John the Evangelist is located on the outskirts of the town of Monterappoli, seat of an ancient castle of the Counts Guidi, on a stretch of the Via Francigena in the Valdelsa.

The oldest written reference to the church is carved into the architrave of the main portal and reads: + ANNI DNI MCLXV / + EC MANIBUS. SCRITA. MAISTER. BONSERI VIR PROBUS. EX GENTE LOBARDA. TRADIA / + CUSTOS + USURA. Unfortunately, today the inscription is almost illegible due to the weathering of the stone.

All historians who have approached this inscription agree in attributing the building to the magister Bonseri, Lombard architect, who built it in 1165. At that time the area surrounding the parish was a fiefdom of the Guidi counts to whom it was confirmed by various imperial diplomas issued between 1191 and 1273, that is, until the republic of Florence took control of the Monterappoli castle, but not total control since the parish church of San Genesio possessed some assets in the castle as shown in a bull of Pope Celestino III of 1194.

As for the written testimonies on the parish, the oldest dates back to 1231, the year in which it appears that the parish priest of Monterappoli participated in San Miniato in an act of submission to that municipality.

In the mid-thirteenth century the parish of Monterappoli had 10 suffragan churches [5], forming a fairly unproductive territory as can be seen from the tithes paid between 1276 and 1303. From a document of 1260 we know that at that time the parish priest was called Canneto di Tiezo and he lived in the parish together with a community of canons. In 1286 the management of the parish was entrusted to the canon Father Cino.

From the fourteenth century onwards, the parish church as well as the castle of Monterappoli began a long period of decline both on an institutional and structural level, so much so that in 1368 the Florentine republic allocated funds to rebuild the castle [9], damaged by the raids of the mercenary troops and in 1395 the municipality was worried about the improper uses that the parishioners made of the parish building.

Until 1486 the patronage of the parish was of the Frescobaldi but in that year it passed to the Corsini.

In the 17th century the church was renovated in Baroque style and in 1742 it was put in communication with the adjacent chapel of the Company of the Sisters of the Holy Face.

The restorations carried out between 1969 and 1970 resulted in the elimination of all Baroque plaster to restore the internal walls to the Romanesque masonry, furthermore the rectangular windows were closed, restoring the original layout of the facade. In the volume Chiesa romaniche in Valdelsa by Moretti-Stopani there is an interesting photograph where the facade is still portrayed as it appeared before the last restoration carried out after the publication of the book (1968, with the mullioned window and the two walled oculi and the two large windows opened on the façade during the eighteenth century.

The gabled façade has strong pilasters and simple decorations in phase with the masonry which give it a perfectly symmetrical aspect; in the center opens the portal projecting onto the façade with a round arch supported by two brick columns terminated by marble capitals and surmounted by a mullioned window, now without the central column, decorated with wedges, whose volume is slightly detached from the line of the facade.
The architrave of the portal

This element together with the architrave where in addition to the inscription there is also a blessing hand between two rose windows [13], demonstrates the Lombard origin [14] of the designer, the magister Bonseri.

The crowning of the façade was achieved through a simple brick decoration with intertwined round arches and this decoration also continues along the sides up to the tribune where it is superimposed on the hanging semi-columns that mark the volume of the apse. Externally, other decorations consist of oculi, cross-shaped slits and various ceramic craters.

On the left side stands the bell tower built on the remains of a tower with a circular base and rebuilt after the Second World War. One of the bells is dated 1294 and comes from the castle of Monterappoli [15].
Internal
Internal

The interior of the church has a single nave covered with exposed wooden trusses and ending with a semicircular apse, on the sides of which there are two single lancet windows, identical to the external ones. The wall face is entirely in bricks except for the apse which still has the Baroque frescoes. The presbytery, raised by a few steps from the rest of the church, houses the high altar in the center, in stucco painted with imitation marble.

In the middle of the nave are the two side altars, dedicated to the Madonna del Rosario (left altar) and to Sant’Antonio da Padova, whose altarpieces consist of two smooth composite columns supporting a broken pediment; in the center there is an altarpiece depicting the saint who dedicated the altar.

The 17th century wooden crucifix and the small frescoed room, located on the left of the access portal, which contains the baptismal font are interesting.

From this church comes the panel with the Madonna and Child enthroned between Saints Sebastian and John the Baptist, Giovanni Evangelista and Domitilla di Rossello by Jacopo Franchi, datable between 1420 and 1430 ca. currently exhibited in the Museum of the Collegiate Church of Sant’Andrea in Empoli.