Norcia - the culinary, artistic and spiritual centre of Norcia in the Umbria hills

You are here:
Home » Sights of Umbria » Norcia 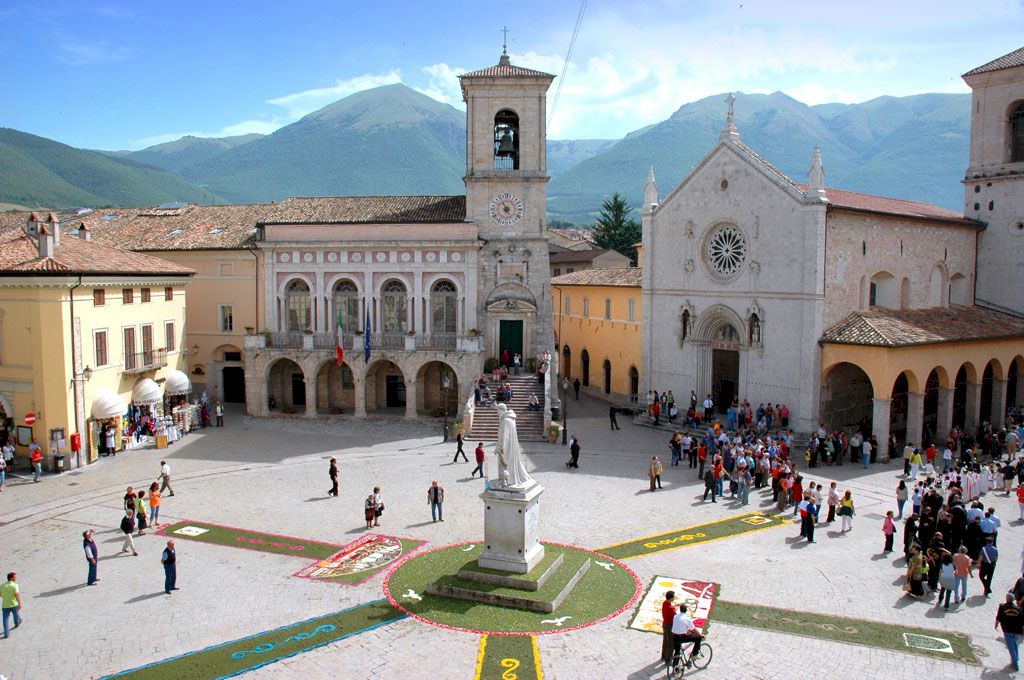 The culinary, artistic and spiritual centre of Norcia in the Umbria hills

Norcia, Italy is located on the flat floor of a valley around 600 m high in the Sabbine mountains of Umbria, Italy, between the Sordo and Torbidone rivers. Norcia has long been inhabited and gained political importance in Roman times, when it was mentioned quite frequently by Roman historians. Norcia suffered materially at the hands of the Longobards and then the Goths, but recovered to become a prosperous town during the Middle Ages. Unfortunately, Norcia has been severely damaged by earthquakes over the centuries, resulting in damage to its architectural heritage.
Norcia is famous as the birthplace of Saint Benedict, founder of the Benedictine order, the first Christian monastic fraternity. He lived at the end of the 6 C and emphasized a relationship between prayer and the humility of work.

Norcia is worth a visit for its restaurants and food shops. Norcia’s production of sausages, capocollo, salumi and hams made from wild boar and domestic swine has given a word to the Italian language – norcineria – a pork butcher’s shop. Other important ingredients of local cuisine are the black truffle, available November to March, and the lentils of Castelluccio di Norcia.Pork sausages, black truffles, cheese and the lentils are the basic ingredients of Norcia’s local cuisine. Try a plate of sausages and lentils while you’re in Norcia.

Norcia also rewards those interested in art and architecture. The GothicChurch of St. Benedict is built in the shape of a Latin cross with a polygonal apse and with a beautiful ogival portal. Inside there are a number of fine frescoes and paintings dating from the 16 C and 17 C. The outside of the church preserves its original structure in one part of the facade only. TheDuomo of Norcia is a Renaissance creation but not much of the original building remains due to restoration during the baroque period that noticeably changed its architectural style. Another impressive example of Renaissance architecture in Norcia is the Castellina, a quadrilateral fort built by Vignola and currently seat of the Municipal Diocesan Museum. The Church of St. Augustine is worth a visit for its ogival portal which houses a well-preserved 14 C fresco of the Madonna and Child with St. Augustine in its lunette. TheChurch of St. Francis has a beautiful rose window in  its facade.

Near Norcia, the atmospheric village of Serravalle in the green Umbrian countryside is worth a visit. For trekkers and walkers, the plain of Castelluccio offers a splendid spectacle during Spring when the meadows are filled with flowers in a multitude of colours.

Worth a visit. More about the gastronomic town of Norcia in Umbria, Italy.
Anna Maria Baldini

Spoleto Spoleto is well worth a visit both on account of its wonderful location on the slopes of the Apennines and for it Roman, mediaeval and Renaissance art and architecture. The history of Spoleto is long and illustrious and this is…
Read More »

Todi Todi was important to both Etruscans and Romans and is the location of several interesting Gothic and renaissance buildings, including the 11 C cathedral and 13 C palazzi. Its triple walls are still easily discerned. The innermost is Etruscan, the…
Read More »

Gubbio Gubbio is beautifully situated at the foot and on the slopes of Monte Ingino and Monte Calvo, with a wonderful view out over the Umbrian plains. Gubbio is austere in appearance because of the dark grey stone from which the…
Read More »